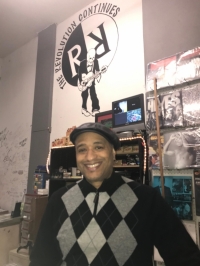 “You get to pick the music [to play in the store]. You don’t get a lunch break,” said 49-year-old Rob Love, reflecting on his 35 years at Record Revolution, at 1832 Coventry Road. The 55-year-old rock-and-roll institution is closing on Dec. 31.

Founded by Peter Schliewin, the store blossomed in 1967 along with the new hippie shops in a neighborhood with a new name, “Coventry Village.”

Coventry had been a rundown, half-century-old neighborhood whose immigrant population was leaving many storefronts empty; they were dying, or moving further east into the suburbs. Coventry Village became the Cleveland area’s first old neighborhood to undergo almost full youthful revitalization brought on by the baby boomer generation.

John Gorman, WMMS radio executive in the 1970s and ‘80s, wrote on his Web page, Buzzard Book, that if Schliewin was “really hot” about a new record release, “he’d drive down to the station and drop it off.” In June 1983, Schliewin was killed in an automobile crash. By then he was already diversifying beyond being just a “cutting edge” breakout record store, including selling marijuana paraphernalia. (He had opened a store in Parma, and the city of Parma sued the store over selling drug paraphernalia. The store’s legal costs approached a quarter million dollars.)

At age 14, in December 1987, Love started working for Record Revolution, four years after Schliewin’s death. Love has always lived in Coventry Village. In the early 1990s he played saxophone in the Swagger Kings—a swing-revival band.

In 2005 Love became a partner in Record Revolution. In 2007, when faced with a 75-percent rent increase demanded by the then landlord, the three-storefront Record Revolution became one storefront. The store kept the exquisite art deco deep-throated glassed entrance, with famous window displays and booming music on the sidewalk.

Love knows of no systematic photo inventory of the writings, and the store hasn’t been included in any documentary films. Love noted that the Rock & Roll Hall of Fame has not sent a condolence card to Record Revolution, which, along with WMMS, helped break out many rock bands and musicians to the national market over the early decades of the store.

“Before they broke ground on the Rock Hall, we sold annual [Rock Hall]memberships [to our customers]for them,” said Love. Then a national record chain became involved with the Rock Hall. “We offered them panels of autographs and they didn’t want them.”

“They purchased many record jackets from us for display and did not acknowledge us,” he said. “I thought it odd for a [rock and roll] museum to do this, [behave this way with a storied local record store]. If it is a museum, why is there competition [between record stores to the exclusion of rock history]?”

In retirement, he’s staying in the Village. “It’s a clean break. I left the business on my own terms,” said Love, who is married to Cassy and has three stepchildren. “The lease was up, and I turn 50 on New Year’s Day.” He owns his Edgehill Road home and has several hobbies, including kayaking, sailing, woodworking, and restoration of vintage Italian scooters, mostly Vespas. “Jerry Sienfeld [the actor] is a Vespa collector,” noted Love.