Triskaidekaphobia? Not at Roxboro's spelling bee 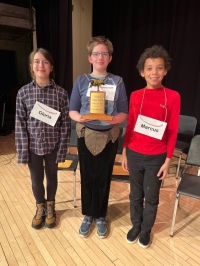 Back in-person, after nearly three years of online spelling, the 13th Annual Roxboro Middle School Spelling Bee was held in the school's auditorium on Dec. 6. Eight spellers, all sixth- and seventh-graders, competed for prizes and their name on the bee trophy.

Brie Bourbeau, champion and seventh-grader, will represent Roxboro at the regional bee, which will be online. Spellers from Ohio and Michigan will compete in the event. Sixth-grader Marcus Shabalala was Roxboros second-place winner. He will be the alternate for the regional event. Congratulations also went to sixth-grader Gloria Chasney, who earned third place.

The bee consisted of multiple roundsmostly spelling words. The fifth and thirteenth rounds, however, were all about word meanings. Spellers had to answer multiple choice questions about words and their definitions.

The Cleveland Orchestra, Macs Backs - Books on Coventry, and Tommys donated prizes for the winners. In addition, Tommy Fello, owner of Tommys, provided Golden Tickets (good for one of the worlds best milkshakes) for all of  the spelling bee participants.

Beth Woodside is a violinist with The Cleveland Orchestra, member of the Music Settlement violin faculty, former board member of Reaching Heights, and coordinator of the Roxboro Middle School spelling bee.