Student musicians rise to challenge of the 'pit' 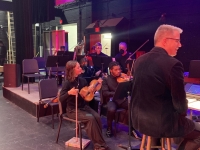 When we think about musicals, probably the first thing that comes to mind is the singers who take center stage. But there are many more people involved in creating a musical. Among the significant contributors are the musicians in the pit orchestra.

In Heights High’s November production of "Sister Act," 26 student instrumentalists took on the challenge of the pit.

According to Dan Heim, Heights High’s director of orchestras, playing in the pit requires a level of skill beyond what is needed in regular school ensembles. Heim should know; an accomplished professional violist, Heim was for several years a full-time orchestra member at Germany’s Theatre Lübeck, where, he said, “Probably two-thirds of the services were in the pit. We’d do operas, operettas, and musicals.”

Heights senior and violinist Derek Korane agreed that playing in the pit is challenging: “Pit music is much longer than my concert music. My book for the musical has around 100 pages, and is also stylistically different and more technically demanding—we have faster tempos, more key changes, and more gimmicky techniques, like glissandos and runs.”

Heim also noted that students have less time to rehearse and learn the material. The students practice independently and are expected to come prepared to after-school rehearsals.

But, student pit musicians are also often assisted by professional players. For "Sister Act," eight “ringers” played alongside students and served as mentors.

Is it common for high schools to employ student pit musicians? Heim said that schools with strong music programs sometimes can do that. Even within strong programs, however, there must be enough advanced players to make up a pit orchestra. Heights is known to have both a strong music program and advanced instrumentalists.

For "Sister Act," the orchestra did not play from a pit area. When the high school auditorium was renovated, a pit was not built into the space and an alternative orchestra location needed to be considered. One solution would have been to accompany the singers from a remote location, via monitors. But, at the suggestion of Jesse Lange, Heights vocal music director, the pit orchestra was placed on the stage.

Thus, the students remained in the room with the singers, and could feel what Heim describes as the “dynamic interaction between performers and audience.” When a player is in a separate room, Heim noted, "You feel like you’re sending [your music] somewhere and you have no idea what’s happening. The connection is lost.” Moreover, Heim wanted the orchestra to remain in the same room, so that students would be recognized for their significant contribution to the show.

Playing on the stage has its drawbacks, however. There is less space for staging, and the orchestra is behind the singers, which can make it hard for the singers to hear it.

This is one of the reasons that composer Richard Wagner invented the pit area for his opera orchestra: to maintain audibility while removing visual distractions from the stage action. The job of the orchestra is to unobtrusively support the singers.

A 2016 Australian study of pit musicians suggests that these musicians experience more stress than those in stage orchestras.

Still, both Heim and Korane said they enjoy the experience. Heim describes the unpredictable nature of every performance as “exciting.”

Korane added, “It's very energetic. Once we start playing, we just go for it. That kind of excitement is palpable onstage.”

Eve McPherson is a CH-UH schools alumna and parent. An ethnomusicologist on the faculty at Kent State University - Trumbull, she currently serves as co-president of the Heights High Band and Orchestra Parent Organization.