Seniors enjoy 'Writing in the Gardens' 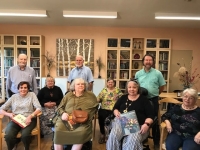 A gathering of writers at Council Gardens.

With lifetimes of stories to tell, and the opportunity to gather with the guidance of a professional writing teacher, eight seniors let their tales unfold during a Literary Cleveland class held in the library of the Council Gardens apartment complex in Cleveland Heights.

The topics they chose to address could be timely or timeless. One writer, who attended the class session the day after the funeral of Queen Elizabeth II, chose to explore how the reign of the UK's longest-serving monarch paralleled much of the lifespans of the generation represented in these classes. The Council Gardens residents enjoyed the subsequent conversation, sparked by the piece about the Queen, that revealed various perspectives about the future of the British monarchy and its role in society.

Another senior writer used the opportunity to explain how one could write about nothing, since after all "nothing is something."

The Council Gardens writing program, which began in 2019, is organized by Literary Cleveland, the nonprofit that coordinates the annual Inkubator conference, as well as numerous classes on the craft of writing. The facilitator for the Council Gardens classes is Christopher Johnston, a veteran journalist and playwright who has done other teaching for Lit Cleveland.

Johnston noted the camaraderie that has developed amongst the classmates during the years he has been leading the group. "They just enjoy each other's company," he said. "For Labor Day, they had a cookout together on one of the patios.”

The writers' group is planning its own holiday party on Dec. 13.

“Our writing class is easily the highlight of my week. A closeness has evolved in the group,” Bonnie Kramer noted. “I turned 75 last summer and enjoy the long view of my life. Writing about it is perfect.”

That camaraderie helps foster an atmosphere of free expression that allows the writers to experiment with topics and approaches, and to feel comfortable sharing their work with the group.

“Already being a visual artist, I never took the opportunity to write prose or poetry—the writing club at Council Gardens has given me a chance to do both,” said Judith Brice. “A whole new world of creativity has opened up to me!”

Council Gardens, located near the intersection of Mayfield and Taylor roads, is a complex of 122 efficiency, one-bedroom and two-bedroom subsidized units for active senior residents. It opened in November 1963. Today, the facility operates as a partnership between the Jewish Family Service Association and HUD.

With Council Gardens' support, the workshop members and other residents will be publishing a small book to celebrate the facility's 60th anniversary. There are also plans to publish a second volume of Writing in the Gardens sometime in the next year or two.

Mike McGraw has lived near Coventry since 1999. His writing on local issues of poverty and homelessness has appeared in the Cleveland Street Chronicle.