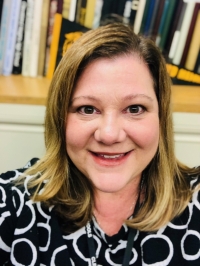 Laura Loebl has been named executive director of the Heights Schools Foundation.

A 1987 graduate of Cleveland Heights High School, Loebl has built a 30-plus-year career in nonprofit development and marketing, corporate communications, and sales. Prior to joining HSF, she was the Development Director at Mandel Jewish Day School in Beachwood.

As a proud alumna and champion of Tiger Nation, Im thrilled to take on this important role of leading the Heights Schools Foundation, said Loebl. Its a tremendous honor to be able to serve the schools and the community that have done so much for me.

After living in Houston for more than 20 years, Loebl returned home to Cleveland in 2016. During her career, Loebl worked in development and project management for various non-profit agencies, eventually opening a marketing and fundraising firm that was recognized in the top 15 in the Houston market. She has worked in the oil and gas industry, was a commodities trader for seven years and, prior to moving to Cleveland, served as director of advancement in an independent school.

Loebl served on the board of the Anti-Defamation League, and volunteered with Junior League Houston and Holocaust Museum Houston. Currently, she is the auction chair of University Hospitals' Five-Star Gala.

Lauras wealth of experience makes her perfect for this position, and I am looking forward to seeing how her leadership advances our support of students through scholarships, classroom enrichment, and more, said Liz Kirby, CH-UH schools superintendent.

The foundation is in a strong position for continued growth, said Susan D. Carver, president of the HSF Board of Trustees. Our board is thrilled to welcome Laura and assist her in taking the foundation to its next level of fundraising, community and alumni engagement, and CH-UH district support.

Loebl attended Stephens College in Columbia, Mo., is married to Bryan, and is mom to 17-year-old twins, Bex and Charlie. In her spare time, she raises chickens and enjoys reading and travel.

HSF was created in 2016, building upon decades of alumni work, fundraising, and programming. Its mission is to engage alumni and community members to celebrate our past, embrace our present and support our future.