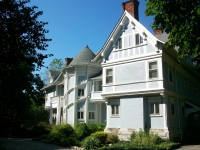 The Warner-Racca house, one of Cleveland Heights’ most picturesque, is known for the projecting circular staircase that forms a major component of its façade.

Designed by architects Meade and Garfield, the East Overlook home was completed in 1898. It was designated a Cleveland Heights Landmark in 1996.

The architect may have modeled the distinctive stairway appendage after the 16th-century spiral staircase tower at the Chateau of Blois, in France; in any case, he was certainly inspired by the romantic chateaux along the Loire River.

Half-timbering and ornate chimneys add to the eclectic décor of the home. Its interior boasts artfully carved woodwork and leaded glass, including around the graceful staircase.

The home's original owner, William Henry Warner, was president of seven coal mining companies, including the W.H. Warner Company, and was director of six manufacturing and real estate businesses—all in Cleveland.

Concrete contractor Peter Racca and his wife, Dolores, owned the home from 1955 to 1996, and raised five children there.

Ken Goldberg is a member of the Cleveland Heights Landmark Commission, which preserves and protects buildings, works of art and other objects of historical or architectural value to the community. The commission's seven members are appointed to three-year terms by CH City Council.