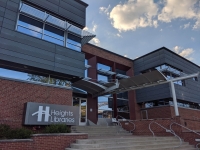 On the afternoon of Oct. 6, at Heights Libraries' Lee Road branch, a young teen "under eviction" from the library tried to enter the building with what appeared to be a handgun protruding from the waistband of his pants. It was later determined to be a toy “splatter gun.”

The security guard in the lobby was alerted to the teen’s presence by several children as they entered the building. He took swift action to secure the safety of customers in the building by immediately calling 911, then calmly confronting the teen and preventing him from entering the building.

Cleveland Heights police arrived quickly and took the teen into custody. According to police, the weapon was not a handgun, but a realistic-looking toy gun—an Orbeez, or water pellet gun.

Heights Libraries is grateful for the swift action of the guard and the Cleveland Heights police, who prevented the situation from escalating.

“Incidents like this are thankfully extremely rare,” said Heights Libraries Director Nancy Levin. “But with the rise of gun violence, we understand that we need to be ready for anything, and must take threats seriously. That’s why we have our own security staff who are skilled at handling and de-escalating a wide variety of potential crisis situations, including those involving young customers.”

Levin continued, “It’s also why we engage in staff safety trainings on a regular basis, such as active-shooter trainings and first aid and CPR. We care deeply about the safety of our community and our staff.”

The security guard [whose name has been removed from this article at the library's request] is known in the library system for his warmth and approachability, and already had a relationship with the children who alerted him to the potential danger.

“I’m just glad that everyone is safe, including the young teen with the toy gun,” commented the guard.

The teen had previously caused property damage at the Lee Road branch.