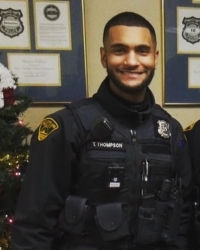 Travis Thompson was a two-time recipient of the Jason D. West Scholarship, in 2013 and in 2018, when he attended the Cleveland Heights Police Academy. He is currently a member of the Euclid Police Department.

The goal of the scholarship fund has been to encourage young men and women to consider a career in law enforcement, and to strengthen the relationship between young people and the police.

At its inception, the organization's committee awarded scholarships to Heights High seniors who had completed the two-year Criminal Justice Career Tech Program and were interested in pursuing additional education in criminal justice. In 2021, however, the school district discontinued the program. As a result, the scholarship committee is reevaluating its work.

One of the first things that the committee did in the restructuring process was to acquire tax-exempt designation from the state of Ohio and 501(c)3 status from the IRS. The organization is now The Officer Jason D. West Memorial Fund with its own board of directors. This step made the organization entirely separate from the school district.

Lita Gonzalez, president of the Officer Jason D. West Memorial Fund Board and a founding member of the organization, spoke about the restructuring. “I’m excited about the direction we are taking,” she said. “The new board is working on ways to partner with the community, city and the police department to encourage young people to enter the criminal justice field, strengthen the relationship between young people and the police and, of course, to honor the life of Officer Jason West.”

The board expects to continue to encourage young people to enter the field of criminal justice and is working on several options to accomplish that goal.

“The scholarship students are now serving in so many ways,” said Gonzalez. “We are proud to have helped so many and look forward to finding new ways to encourage young people to serve.”

Since 2008, the Officer Jason D. West Scholarship Fund has awarded 23 college scholarships totaling $23,000 to Heights High seniors. Two of those students, after completing college, applied and were accepted to the Cleveland Heights Police Academy. The organization paid their tuition, amounting to more than $8,000. They both became police officers.

Three of the scholarship recipients are serving or attending school: