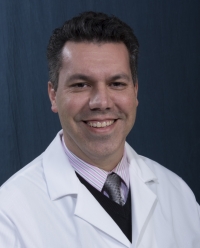 Hammond, the new director of clinical services, is leading a team that is developing programing and building a curriculum for the various patient treatment units.

The inpatient curriculum for the 112-bed hospital is based on non-drug interventions that include therapy, support groups and classes—activities that promote interaction, engagement and learning skills.

“Instead of an individual having to undergo years and years of therapy," said Hammond, "we look for how we can have measurable change in the shortest time possible. We want to give clinicians the tools they need to be able to manage their cases more effectively and move their patients to improved health.”

Hammond joined The MetroHealth System in December 2019 as a staff psychologist at the Cuyahoga County Jail, two months after MetroHealth assumed responsibility for all medical care at the jail.

“Part of my role is to connect the dots across all treatments, whether it’s at the jail, the Behavioral Health Hospital, or the partial hospitalization program and intensive outpatient program being developed,” Hammond said. Those two programs are for people who no longer need inpatient services.

It was the opportunity to help build the program at the county jail, to increase mental and medical services there, that initially drew Hammond to MetroHealth.

Delivering those services became even more challenging in the spring of 2020.

“The jail was in the process of shifting counseling services from individual to group sessions,” Hammond recalled. “We were seeing some great results, and we were able to help a lot more people.”

Then came the start of the COVID-19 pandemic.

The staff quickly reverted group sessions to individual sessions, and did so with no change in staffing levels.

“Providing those services to the inmates turned out to be a major factor in helping to quell some of the initial fears there surrounding COVID-19,” said Hammond.

Before joining MetroHealth, Hammond was a clinical psychologist at the Louis Stokes Cleveland Department of Veterans Affairs Medical Center. He also worked at the Ohio Department of Rehabilitation and Corrections, where he was eventually appointed chief of mental health.

“I’ve worked in environments with intense conditions,” said Hammond, who also has served as a military psychologist for more than 20 years, including his current tenure with the Army National Guard, which included a year-long deployment to Iraq in 2007.

According to Hammond, the key to effective patient care is putting in place strong quality-improvement processes and following evidence-based practices. “I want to take what I’ve learned and apply it to the most underserved members of our community,” said Hammond.

Angela Townsend is a senior writer in the department of marketing and communications at The MetroHealth System.