COS principal looks back at first year 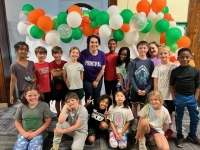 Loretta Pilla knows something about being the new kid in school. The Communion of Saints School (COS) principal, who recently wrapped up her first year at the school, fell in love with education when she was in third grade.

Pilla and her family had emigrated from Italy to Boston when she was 8. Despite the culture shock of moving to a new country and learning English, she thrived. She earned a degree in education at Boston College, where she met her husband. They moved to Cleveland, which Pilla said is “the perfect place to raise a family.” The couple has three children.

Fluent in both Italian and Spanish, Pilla taught Spanish at Notre Dame Elementary School. She served as assistant principal at St. Mary’s in Chardon, and, in 2010, became principal at Mater Dei Academy.

Pilla came to Communion of Saints School in 2021. While taking her leadership role in stride, she said she’s “always happy to be a student.”

As she led the school this past year, she learned much about the students, their families, the parish, and the Cleveland Heights neighborhood she calls home five days a week.

The 100-year-old campus reminds Pilla of Rome. “Walking the grounds, the history of the school comes alive.” Beyond architecture and history, Pilla found a strong community of welcoming families. "COS has some of the most supportive parents I’ve ever experienced, and great students,” she said.

Starting a new school year is never without its bumps. Becoming principal during the coronavirus pandemic brought that challenge to another level. Pilla’s focus was meeting students where they were academically, then bridging the gaps that occurred during the first year of the pandemic. Schedules were tweaked, and educational aides and volunteers were added, providing targeted learning at every level. In addition, lessons in social-emotional learning were implemented.

In-school enrichment was expanded, and the new student newspaper, The Sabre Scoop, was launched. Entrepreneurial opportunities were created, from student participation in the COS Holiday Pop-Up Shop to the Alpha Jump program. Band and drama programs returned.

To balance the intensity of academics, Pilla brought events to the school, including Alpaca Day, Turkey Game Day before Thanksgiving, guest speakers, field trips, and a talent show.

With her first year under her belt, Pilla is excited about the future of COS, and preparing its students for success.

Eileen Ryan Ewen is a children's book illustrator and volunteer librarian at Communion of Saints School. Her children attend COS.