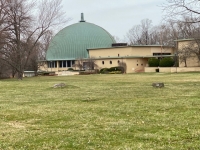 With the expansion of the Park Synagogue building in Pepper Pike well underway, the future of the historic 1947 “Park Main” property and its iconic sanctuary building in Cleveland Heights remains an open question. [The congregation announced a year ago that the Cleveland Heights landmark was for sale.]

Located in a heavily wooded site between Mayfield Road and Euclid Heights Boulevard, east of Taylor Road, Park Synagogue in Cleveland Heights was designed by internationally renowned architect Eric Mendelsohn and is considered one of the premier examples of modern religious architecture in the United States.

“We all felt a real responsibility to making the best solution for Park Main because of its architectural importance, because of Park’s history and because of our commitment to Cleveland Heights and the good relationship we have with Cleveland Heights,” said Susan Ratner, president of the Park Synagogue congregation since 2019. “We didn’t want to become part of the urban exodus.”

In pursuing its goals for preservation, Park has entrusted local developer Sustainable Community Associates (SCA) to work with the synagogue’s leadership and the local community on ideas to re-purpose the Cleveland Heights building, while enhancing and developing its 28-acre site. SCA will then implement the ideas that come from this process as the site’s master developer.

In a major boost to the preservation initiative, the state of Ohio recently announced that it will contribute $1 million from its capital budget to the restoration of Park Synagogue in Cleveland Heights. Additionally, the state has approved a major expansion of the historic tax credit program, which will benefit the restoration efforts.

While SCA proceeds with a master plan for the site with new uses and new construction, it will simultaneously prepare for an historic tax credit application in March 2023.

"Time is really of the essence—with the historic tax credit expansion, the funding cap on large projects like Park will double. This is an unprecedented opportunity, and we must run to it,” said Josh Rosen of SCA.

The Park Synagogue campus has been relatively secluded and private since its construction in 1950, and many Cleveland Heights residents are unfamiliar with the forested campus and iconic building.

“It's essentially as though 28 acres of new land is being added to the city," noted SCA's Naomi Sabel. "This unique circumstance requires full engagement of the city and the community in helping to define how Park fits into what CH aspires to be."

“We hope the commitments made to date underscore for the citizens of Cleveland Heights and the city government the enormous opportunity for a cooperative initiative to re-use and redevelop the Park Synagogue property in a manner that reflects the best of Cleveland Heights values," noted Rosen, "whether through economic development, aging-in place housing, or non-profit arts space."

“We believe that working with the community to affirm and implement a shared vision through a master plan stands in marked contrast to the community’s recent experience at the Severance Center property," Rosen added.

As SCA pursues discussions with elected officials and city staff in Cleveland Heights, the firm plans to continue engaging community members in developing a master plan focused on how best to repurpose the synagogue, reintegrate the campus into the broader Cleveland Heights community, and maintain much of the site’s green space.

To date, SCA has hosted numerous meetings and tours with neighboring residents and various civic groups regarding possibilities for the future of Mendelsohn's building and its park campus. SCA anticipates making a presentation to Cleveland Heights City Council sometime this summer.

Robert Brown is a city planner with 45 years of experience; for nine years, he Cleveland's planning director. A resident of Cleveland Heights for more than 40 years, Brown is a FutureHeights board member.