After 65 years, Heights Cleaners has closed 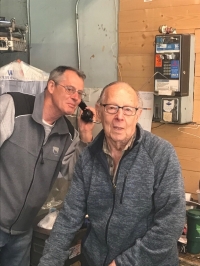 After 65 years in business, opening in 1957, Heights Cleaners—Coventry Village’s longest-running business with a single owner—closed on Saturday, June 4.

The owner, 98-year-old Manny Dishler, has retired after being in the clothes cleaning business for about 75 years.

Soon after Dishler returned from serving in the U.S. Army Air Force as a unit headquarters clerk in North Africa and Italy in the late 1940s, he started working as a home-delivery man for his father, Nathan Dishler, who owned U-Need-A-Laundry in Cleveland.

"I was single," explained Disher. "I wanted Saturday afternoon and Wednesdays off.

But management wouldn’t budge. So, in 1952, when he was 28, Dishler started Prospect Laundry at 19th and Prospect in downtown Cleveland. Being the boss of his own business, he took time off and went courting.

He and Arline Cohen married in 1954 and lived in University Heights, then Beachwood. After 63 years of marriage, she passed away in 2017.

“The first years here were difficult,” recalled Dishler. “I bought an old dry-cleaning shop that hadn’t been modernized. It needed change. I took over the second storefront, adding a laundry. The old dry cleaner had a stack of uncollectable receipts, so I switched to exclusively cash on delivery.”

Along with serving walk-in customers, Heights Laundry, which his wife ran after their two children were raised, picked up and delivered from other small dry cleaners. The gambit paid off. During the 1960s, ‘70s and ‘80s, Heights Cleaners was processing 12,000 to 14,000 shirts a week, along with many other garments.

“We had a great crew of 30 working here,” Dishler noted.

When Dishler started Heights Cleaners, the neighborhood was primarily Jewish, with many post-war European immigrants. Built in the 1910s and '20s, the district gained the “Village” moniker in the mid-late 1960s, with an influx of hippies looking for cheap apartments and storefronts. Accompanying them were some Hell’s Angels who frequented a local tavern, The Cee Saw Café.

Both “the hippies and the Hell’s Angels brought in leather jackets to be dry cleaned. They were courteous," Dishler said, adding, “I was busy here, and didn’t pay attention to the scene on the street.”

Around 1990, Terry Behnke started working at Heights Cleaners. He is a local live-theater actor and director who was then teaching at Wiley Middle School Youth Theater.

Behnke recalled of his job interview, “Manny asked me three questions. Each was, ‘What do you want to do?’ I answered three times, ‘I want a job.’” Dishler accommodated Behnke’s class times, and he got the job.

In the 1990s, business volume started to decline. “People got washers and driers. Wash-and-wear clothes took over the market,” Dishler explained. “Now we have dress-down days and many people are working from home."

According to Dishler, the state of Ohio's mandated shutdown because of COVID-19 hurt the laundry business in Ohio “tremendously.” He noted, “In Florida, where there was no shut down, it didn’t hurt as bad."

Dishler said he will be taking a vacation soon. The two upstairs tenants are staying. The equipment will be donated. His son, Eric, will renovate the two storefront spaces and make them available for rent.

Lee Batdorff has been a Cleveland Heights resident since 1966. A couple decades back, he took a jacket to a well-advertised local dry cleaner, and they didn’t get a stain out. So, he took the garment to Heights Cleaners on Coventry Road—and they got the stain out.