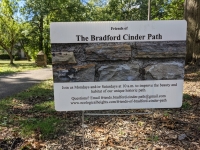 Friends of the Bradford Cinder Path (FBCP) is a group of neighbors who have been working to improve the unique pedestrian path since May 2020. The much-traveled path extends four residential blocks, from South Taylor Road to Canterbury Road, where it lies next to the Canterbury community garden.

Workdays for the upcoming FBCP season will be Mondays at 10 a.m., weather permitting. Six Saturday workdays are also planned, beginning at 10 a.m., April 16, May 21, June 18, Sept. 17, Oct. 15, and Nov. 19. Any questions about where to meet can be sent to friends.bradford.cinder.path@gmail.com.

In 2021 the historic path was designated a Cleveland Heights Landmark.

When the path was originally paved by the WPA in 1938, there were no funds for landscaping, although it appears that a few oak trees were planted. The swaths of greenery on either side of the path vary from block to block, but all have since become infested with opportunistic non-native shrubs and weeds.

The first improvement effort was restoration of the hand-built stone bollards installed at the beginning and end of each block. The city of Cleveland Heights funded the work of an expert mason, who assessed and repaired each one according to its structural needs. He determined that the two on the west side of Queenston Road were likely original, with the other dozen built in the 1960s.

Next, volunteers began to remove invasive buckthorn and honeysuckle. Again, the city stepped up to chip the brush and remove or prune larger trees that were in decline, or hanging over wires.

Deb Franke became captain of the Princeton-Canterbury block, which has been transformed in the past two years. Neighbors joined in to improve habitat for native birds and insects by planting native shrubs such as shrubby St. John’s wort, silky dogwood, buttonbush, and New Jersey tea. Understory trees such as flowering dogwood were also planted, with plans for redbuds to join them this spring. Plants were funded by a FutureHeights Mini-Grant and donations from individuals. Many perennials, such as mistflower and mountain mint, were donated by people in the neighborhood who garden with native plants.

These plantings are more than beautification projects for the neighborhood. Resilient native plants sustain the native insects and birds that co-evolved with them, and the humans whose survival depends on them, urgently, today.

The Bradford Cinder Path is an extension of a loosely organized but significant undertaking by residents planting native species in their tree lawns or front lawns. The project originated on Bradford Road and quickly spread to neighboring streets, becoming the Heights Native Pollinator Pathway. The idea is to provide corridors of plants for pollinators. There is no formal organization, but information can be found by joining the Heights Native Pollinator Pathway group on Facebook, or at www.ecologicalheights.com/heights-native-pollinator-pathway.