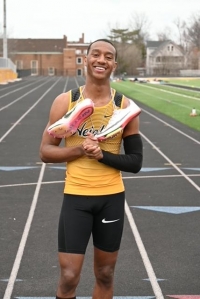 His impressive time of 48.58 set a new indoor record for Heights High and was nearly half a second faster than his previous best. Coleman’s victory topped off a successful night and season for the Heights Tigers, whose boys’ team finished the state meet ranked eighth out of 68 teams throughout Ohio. Qualifying in five events, every Heights competitor clocked a personal best to close out the indoor season.

Freshman Jane Mueller competed in the girls’ 1,600-meters, knocking seven seconds off her time, while senior Braedan Gallagher finished 13th in the state in the boys’ 1,600-meter, with a personal best time of 4:24.

Two boys’ relay teams, both consisting of Coleman, Jacob Rice, Keonshae Boyd Bey, and Jeremiah Dillard, had impressive races, coming in third overall. But it was the boys’ 4 x 200-meter relay that Coleman said especially motivated him in his individual race. Heights boys crossed the finish line third in the fastest heat, but quickly learned that two teams from other heats had beat their time by less than eight one-hundredths of a second.

“I had anger in me . . . and drive,” Coleman recalled. “I didn’t like how we lost that 4 x 200, and I felt like I just had to get this win.” He spent the time between the two races jumping rope and listening to soft music to clear his mind.

When it was time for his event, Coleman was ready. He recalled, “As soon as I got off the blocks, I felt confident.” He took control of the race halfway through, and there was no stopping him. “When I came down that final straightaway and saw the clock, I knew the race was mine.”

“To be a champion, you have to have physical ability and mental toughness,” said Scott McNulty, Heights High’s head track coach. “Marius has both. He is representative of all that we already have at Heights, a validation of who we are and who we can become. For Jane to be just 22 seconds away from the fastest girls’ mile ever as a freshman, and for Braedan to have offers from Division 1 running programs, and for our relay teams to be beating some of the best programs in the state . . . the future of Heights running is extremely bright.”

Heights High will host the 38th annual Weingart Relays on Saturday, April 9, from 9 a.m. to 4 p.m. at the high school track. With an inaugural Weingart Junior meet for middle school teams on Friday, April 8, at 4:30 p.m., the two-day event is an opportunity for the community to come out and cheer for some of the best runners in the state.

Krissy Dietrich Gallagher, a longtime resident of Cleveland Heights, is a freelance writer under contract with the CH-UH City School District. She is Braedan Gallagher's mother.