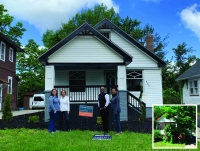 In 2019, FutureHeights, in partnership with the city of Cleveland Heights and the Cuyahoga County Land Bank, initiated FutureHomes, a housing rehabilitation program focused on bringing vacant homes in Cleveland Heights back to productive use; and improving the economic, social, and environmental conditions in their respective neighborhoods.

Since its inception, and despite the challenges created by the pandemic, FutureHomes so far has managed the rehab of 20 properties.

“Homes have luckily sold quickly, but we haven’t been able to showcase the good work through open houses because of COVID restrictions,” said Deanna Bremer Fisher, executive director of FutureHeights. “We’re looking forward to that changing.”

The program originally focused on the "center city" area, comprising the block surrounding Heights High, in order to leverage the public investment in the school’s renovation. Upgrades included improvements to streetscape conditions and aesthetics, as well as the housing stock.

The program has since expanded into the Noble neighborhood, and has its sights set on other target investment areas.

Bremer Fisher noted, “Program homes have, at purchase, been more than just vacant; they’ve been severely distressed or even slated for demolition, and weren’t safe or healthy places to live. FutureHomes’ goal is, in part, to remedy this.”

FutureHeights works directly with developers to create a scope-of-work plan, to ensure that each rehab is well executed, and reflects the character of the surrounding neighborhood.

The housing stock in Cleveland Heights represents distinct, early 20th-century architectural styles. Preserving the design and integrity of each home is a cornerstone of the FutureHomes program. When possible, historic features, such as front porches, built-in cabinets and hardwood floors, are restored and refinished.

Of the 20 homes in the program, 15 of them have sold, and all are owner-occupied. The others are under construction, due to be completed this spring.

To encourage resident involvement, FutureHeights offers exterior mini-grants of up to $500 to homes located within designated areas. Funds may be used for painting, landscaping, lighting, and other exterior improvements. Go to www.futureheights.org/wp-content/uploads/2019/04/FH-Model-Block-Mini-Grant-Program-Application.docx to access a mini-grant application.

To learn more about the FutureHomes program's history and current projects, visit www.futureheights.org/programs/futurehomes-program, or e-mail alawless@futureheights.org.

Abby Lawless is the director of real estate development at FutureHeights.