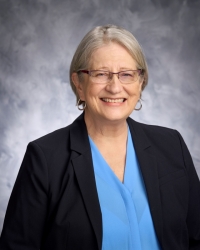 At its Feb. 7 meeting, Cleveland Heights City Council appointed Gail Larson to the seat vacated by Kahlil Seren, who was sworn in as mayor on Jan. 3. The appointment runs through Dec. 31, 2022. Seren's full unexpired term runs through Dec. 31, 2023. The last year of it will be on the ballot in November 2022. Larson said she plans to run for the seat in that election, to serve out the remainder of the unexpired term.

The timing of the appointment came as a bit of a surprise, even to Larson, who happened to be at the council meeting.

Council Member Tony Cuda said that Larson was a “great choice,” but noted that, while council had discussed applicants in executive session just prior to its public meeting, there was no guarantee that council would agree on a candidate that evening. When the vote was taken, however, council unanimously voted in favor of appointing Larson.

“I am delighted to be a part of this newly constituted council at this historical time in the city's history,” said Larson. “It is an honor to have been selected.”

A retired payroll specialist and speech pathologist, Larson has lived in the city’s Noble neighborhood for eight years. She is a member of the Greater Cleveland Congregations (GCC) Housing Team that has studied housing conditions in the northern part of the city and advocated for the resolution of problem properties in the area.

Larson's application and interview are posted online at www.clevelandheights.com. The LWV conducted interviews with the candidates that council wanted to be interviewed, asking the same questions of each.

In her application, Larson wrote, “As a member of the GCC Cleveland Heights Housing Team, I have attended or remotely observed many Committee and Council meetings and observed Housing Court. I participated in walks of the neighborhoods to identify neglected properties. I helped prepare and participate in the Trolley Tour of the neighborhoods north of Mayfield. Because the GCC Team wanted to understand why properties are not moved through Housing Court more quickly, I attended Court sessions.”

In her interview, Larson said she would recommend that council appoint an interdisciplinary Problem Property Team that would meet frequently to discuss specific problem properties and work to resolve them. She also pledged to examine the city’s $22 million in unencumbered funds to see if they could be used to fully staff city departments, including the Housing Department. Larson also said she would make revitalizing business districts on Noble and Taylor roads, as well as Severance Town Center, top priorities.

Among her many volunteer activities, she has served on the city’s Citizens Advisory Committee, the committee that makes recommendations for the allocation of Community Development Block Grant funds, for three years. She is co-chair of the LWV of Greater Cleveland's CH-UH Chapter, and is a member of its Observer Corps, which attends and reports on city council meetings. [From the time she applied as a candidate for the council vacancy, Larson did not serve as an LWV meeting observer, so as to avoid any conflict of interest.] She is a member of the Heights Friends of Immigrants Steering Committee and the Heights Coalition for Public Education Steering Committee, and is a tutor at Noble Elementary School.

As he congratulated and welcomed Larson on her appointment, Council Member Craig Cobb said, “Unlike the year that it took the last city council to fill a vacancy, we did it in less than the 45 days as the charter requires.” If council had not appointed someone within the allotted time, the mayor then would have appointed someone.

Cuda also welcomed Larson and said, “It’s so great to have another ally on housing and to have somebody with a nice, gentle touch that you have. You are just always doing homework and thinking about this city—and I just couldn’t be more pleased that you are joining us.”

Council President Melody Hart said, “We had a lot of excellent candidates, so it was really a hard decision to make. Gail is one of those excellent candidates, and we applaud her active community involvement over the years, particularly in housing. We are happy to have her join us on council.”

Larson will be sworn in at the next regularly scheduled council meeting, on Tuesday, Feb. 22.

[Editor's note: This article was updated at 5:49 p.m. on Feb. 8, to correct several points, and to clarify Gail Larson's presence at the Feb. 7 council meeting.]