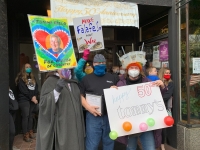 On Friday, Jan. 14, Tommy’s restaurant celebrated its 50th year in business. (Fifty years? How is that possible? Tommy must have been a kid when he opened the business!)

In fact, Tommy Fello was just a teenager when he began working as a soda jerk and stock boy at a drug store and soda fountain on Coventry Road. And he was just 19 when he purchased the business from the former owner in 1972 and opened Tommy’s restaurant. Its original location on Coventry had only seven seats. It now seats 125, and has become one of the most-loved businesses in Cleveland Heights.

About 50 people gathered outside the restaurant at 11 a.m. on Jan. 14, for a “love-in” to show their appreciation for Tommy Fello and Tommy’s restaurant. Some carried signs reading, “Tommy for Fello for mayor of Coventry” and “Make falafel, not war.”

Fello thanked the crowd and said, “There’s no place I’d ever want to be than down on Coventry.” As members of the crowd chanted, “50 more years,” Fello joked that his retirement plan was to be Bernie in the movie “Weekend at Bernie’s.”  “They’ll just prop me up at the front of the store so that I can waive to everyone,” he said. “Thank you so much for all the support and the love that you are giving me now. That’s what I feel all the time when I’m down here is that love. That’s what makes my job so easy.”

Cleveland Heights Mayor Kahlil Seren presented Fello with a proclamation from the city.

Julianna Johnston Senturia, executive director of the Heights Schools Foundation, gave Fello a T-shirt, and announced the creation of a fund in his honor. The Tommy’s Education and Enrichment Fund honors Fello’s positive impact on the community, and amplifies his values and legacy. It will “support strategic efforts that will help Cleveland Heights-University Heights' students thrive.”

Fello, a 1970 Heights High graduate, was inducted into the Heights High Distinguished Alumni Hall of Fame in 1990.

Response to the fund so far has been great, said Senturia. “There are many people who want a simple and effective way to say ‘thanks.’ So many of us have personal stories connected to Tommy’s, and the new fund offers a way to make a difference in Tommy’s honor.” As of mid-January, nearly $3,500 had been donated by 33 people.

Contributions to the fund can be made online at www.heightsschoolsfoundation.org or mailed to Heights Schools Foundation, 2155 Miramar Blvd., University Heights 44118.