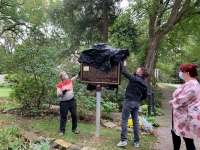 Members of Cleveland Heights Historical Society; the Wheeler family, who currently own the house; and community members attended an unveiling ceremony on Oct. 23. Photo by Deanna Bremer Fisher.

Constructed of Berea sandstone found on the property, the house was built sometime between 1820 and 1835, making it the earliest existing structure so far identified in Cleveland Heights, and a valuable link to the city’s early history.

The home takes its name from the Curtis and Preyer families who were early residents in the area.

The Curtis family bought property in "Turkey Knob" and harnessed power from Dugway Creek for a cider and grist mill. They sold quarried stone and felled timber. The house was built of 18-inch stone walls, with a roof of ax-hewn tree timbers.

The Preyer family, German immigrants, moved to the area in 1864 and established the Lake View Wine Farm. The creek-side settlement grew to include a general store, post office, cobbler, smithies, churches, a school, and a planked toll road. It was named "Fairmount."

After the Preyer occupation, the house was remodeled to include the porch and dormers seen today.

Cleveland Heights Historical Society spearheaded the effort to install the marker, with funding from the Herbert and Margaret Jakob Charitable Trust.

John Wheeler is a trustee for the Cleveland Heights Historical Society and, along with his wife, is the owner of the Curtis-Preyer Stone House.