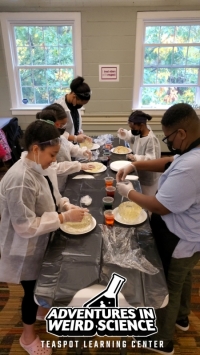 As an undergraduate, she majored in biology, then became a high school science teacher who made her classes hands-on and interactive in order to make the subject matter accessible, rather than intimidating.

“Some kids just like science but don’t want to become scientists,” Bankston said. “I wanted to show them that was OK—science was for everyone.”

Now Bankston is the co-owner of TeaSpot Tutoring (2065 Lee Road), a business she opened with her husband, Seneca Bankston, in November 2020. TeaSpot Tutoring provides academic and social-emotional learning support for students in kindergarten through eighth grade. It also hosts a young men’s mentoring workshop and other programming, such as a series of STEM-focused workshops that aim to bring science to life. TeaSpot also offers hands-on STEM-themed kits for students to work on at home.

In October, TeaSpot hosted an “Adventures in Weird Science” lab, in which participants made models of the human brain out of gelatin. “Don’t use flavored gelatin, or your brain will fall apart,” Bankston advised with a laugh. She added, “I did put some green dye into our molds for a little color, though.” Students had the chance to hold these gelatin brains in their hands and talk about them from a three-dimensional perspective. They even had the opportunity to pretend they were doctors doing surgery before taking the brains into a room with a blacklight, to see how that changed how they looked.

“So often kids are looking at things on screens, or in books, and don’t have the chance to get hands-on. I want to provide approachable opportunities to be engaged with science,” Bankston said.

In December, TeaSpot Tutoring will be offering two STEM-themed workshops, primarily geared for third- through eighth-graders, though younger students are also welcome.

The first, on Tuesday, Dec. 21, is "You Are What You Eat: Food Science." The second, on Tuesday, Dec. 28, will cover How "Stuff Works: Circuits, Gears, & Energy." Both three-hour workshops run 1–4 p.m., at TeaSpot Tutoring. The cost of each workshop is $35 per child, with a 15% discount for families with multiple children participating. In addition to the hands-on learning activities, participants also get other goodies, such as T-shirts, and lunch is provided.

“The idea is for students to get comfortable with the practice of exploring. It helps them become better critical thinkers,” Bankston said.

Sarah Wolf is the community-building programs manager at FutureHeights.