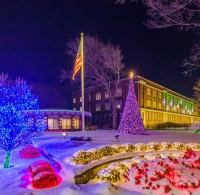 Continuing a long-held holiday tradition, GE Lighting, a Savant company, will illuminate its Nela Park headquarters, at 1975 Noble Road, with a festive display beginning Friday, Dec. 3. This is the 97th year the company will have created its light show. This year’s theme, Holiday Season is in the Air, will feature nearly one million LED lights, and stretch along Noble Road for several blocks. The display will stay illuminated 24/7, through Jan. 3.

Earlier this year, the opportunity to turn on the Nela Holiday Lights was auctioned off to the highest bidder, to benefit the Greater Cleveland Food Bank’s Harvest for Hunger. For the first time ever, a special guest will step to the podium alongside GE Lighting President and CEO Bill Lacey, to flip the switch at approximately 5:30 p.m. on Dec. 3.

This year’s display includes nine colorfully lit vignettes that include hot air balloons and baskets filled with gifts and cards; Santa’s reindeers ready to take flight; festive snowmen and snowflakes galore; a giant iPad that controls the rotating colors of the holiday pole trees; colorful Christmas bulbs and other holiday décor that adorn the buildings; a hot air balloon selfie station where visitors can capture a festive, personalized picture to share with loved ones; and a replica of the National Christmas Tree.

For 59 years, GE Lighting, now owned by Savant Systems, Inc., has provided the design and lights for the National Christmas Tree that in Washington, D.C.

The lights will all be LEDs, which last 10 times longer than traditional holiday lights and save up to 80% in energy costs. The entire light display will be visible from the street.

Ben Sabol is the director of communications for GE Lighting, a Savant company.