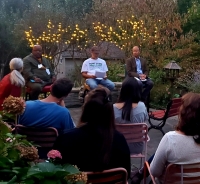 On Oct. 13 and 14, the Cleveland Heights Green Team hosted forums with five full-term CH City Council candidates, in which environmental leaders engaged candidates in a Q-and-A session exploring the concept of governing with a "sustainability lens." Questions were provided prior to the forum. Five out of the six candidates were available to participate, with Davida Russell unable to attend.

The five participating candidates agreed that updating the city’s master plan with clear and actionable sustainability guidelines should be a priority, and that a CH sustainability director should be appointed.

Candidate Lee Barbee II explained that “the Cleveland Heights’ tree logo should serve as a metaphor for the city’s responsibility to develop and implement policies and processes designed to protecting green space and promoting more environmentally friendly practices.” He noted his work at Forest Hill Park, and his role as a social worker in motivating his desire to mitigate environmental impacts on children and families..

Candidate Craig Cobb advocated for reimagining sustainability as integral to the decision-making process for both city staff and council. He emphasized the “need to involve the community and to maintain open channels of communication, so that city officials can understand what residents truly care about and engage their support for decisions made with a sustainability lens.”

In his opening remarks, candidate Tony Cuda said, “I am connected to the city’s soul,” adding that this connection “drives my commitment to helping shape its future.” He expressed concern about the impact of climate change on the region, and Northeast Ohio’s likely future as a climate refuge. “Updating the master plan to make Cleveland Heights a leader in sustainable practices across multiple sectors should be the starting point,” he said.

Candidate Anthony Mattox Jr. remarked on his vision of a “culture of sustainability, in a community where both government and residents play active roles as environmental stewards.”  He said he believes that equity, justice, and sustainability intersect, and must be addressed collectively. Mattox said his environmental commitment developed through what he calls “accidental sustainability," noting that his “work promoting gardening to combat food deserts and health issues in marginalized communities led to developing awareness of soil and water quality issues.” He envisions a “champion of sustainability” at city hall, who “can inform and guide members of council, the administration and city boards and commissions.”

Catalina Wagers is resident of Cleveland Heights' Fairfax neighborhood. She is actively involved with several organizations, supporting causes and programs focused on the advacement of NEO through better access to education, policy advocacy, and environmental protection. She is co-founder of Cleveland Heights Green Team.