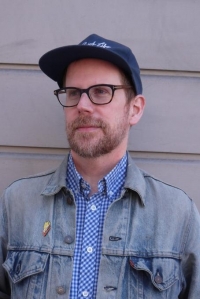 Award-winning author Doug Henderson has had a long-term love affair with Coventry Road. It’s the setting of his forthcoming novel, The Cleveland Heights LGBTQ Sci-Fi and Fantasy Role Playing Club, which focuses on a group of, in his words, “D-list gays,” who haven’t been well represented in modern fiction. These are characters who, Henderson notes, deserve acknowledgement, recognition and inclusion in the larger sphere of LGBTQ+ life and culture.

Why Coventry? Why Cleveland Heights?

Henderson recalls the first time he visited Coventry in its 1990s heyday, and the “vibe” about the neighborhood, which “bubbled up” as he explored its bustling shops and services. “I knew I would write about it someday,” he said. “The novel is a love letter to Cleveland. Every time we visited family, I would return to Coventry to refresh my memory, see the changes, see what stayed the same.”

Henderson grew up in Barberton and graduated from Kent State University. During his tenure as an ESL instructor in San Francisco, he earned his M.F.A. from San Francisco University. Henderson’s first break into the national literary scene came in 2018; his short story, “The Manga Artist,” was named runner-up in the Iowa Review Awards for fiction. It then went on to win a PEN America Best Debut Short Story award in 2019.

At that time, Henderson was busy raising two young children with his husband, Chuck Chung, a scientist, in the Castro District. The Cleveland Heights LGBTQ Sci-Fi and Fantasy Role Playing Club had been finished for several years and had received, as Henderson noted ruefully, “something like 27 rejections.” The editors of the Iowa Review reached out, post-PEN America awards, and asked Henderson if they could read it. Their feedback to him: “WE LOVE YOUR NOVEL.”

Set in the present day, the novel follows protagonist Ben, an awkward, nerdy young man who earns a living selling thrift on eBay, and revels in nostalgia for the cultural milieu of his late childhood and adolescence. He suffers through unrequited love, plummeting self-esteem, and the isolation that comes from what Henderson describes as “never seeing yourself as an included person, as a represented person” in American gay cultural life.

The role-playing club Ben joins at Readmore Comicx and Games to try and ease his social anxiety—a motley crew of queer-identifying men and women—provides him with a means to connect with other young individuals who are on similar paths of self-discovery and maturation.

Careful readers will recognize Henderson’s contemporary interpretations of Coventry’s past. Jitterbugs, Ben’s favorite coffee shop, is a re-visioning of the Coventry Arabica. Destroyer Records and its basement mini-shop, Vinyl Vault, hearkens to Record Revolution’s place as a THE music shop on the East Side.

Other iconic establishments, well known to Heights residents, flow through the novel as fictionalized characters in their own right.

The Cleveland Heights LGBTQ Sci-Fi and Fantasy Role Playing Club is sure to resonate with a broad range of readers: those who want to revisit, in their own imaginations, the vibrancy of Coventry life; those who want to amplify the representation of historically marginalized characters in literature; and those who are on their own journeys of identity development and stabilization.

Doug Henderson has given the Heights the gift of an LGBTQ+ narrative that is personal and political, local and cosmopolitan.

Sarah West has taught English at the middle-school, secondary-school and college level since 1993. She has been friends with Doug Henderson since 1991 and was with him when he first visited Coventry. She has never completed a game of D&D.