Series to explore links between public education and democracy 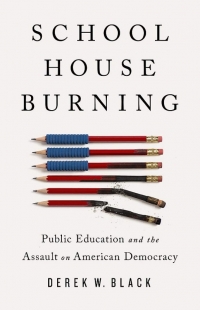 The public is invited to attend a virtual, three-part series about School House Burning: Public Education and the Assault on American Democracy, to be held on Zoom on March 10, March 24 and April 7, 7–8:30 p.m. Author Derek Black, professor of constitutional law at the University of South Carolina, will kick off the March 10 meeting.

School House Burning documents how public education at public expense became embedded in every state constitution because an educated citizenry is essential to a successful democracy.

This historic journey that made "education the state's absolute and foremost duty," began with the Northwest Ordinance of 1785 and 1787. The critical role of public education was confirmed during Reconstruction and the Civil Rights Movement.

Black notes, "While threats to the ballot are immediately understood as threats to democracy, attacks on public education are not always fully appreciated as such."

The book discussion is sponsored by the Heights Coalition for Public Education. To register, visit the coalition’s website, chuh.net/coalition/home.

In Cleveland Heights, the book is available at Mac's Backs (for a 10% discount), and Appletree Books.

Susie Kaeser has been a proud Cleveland Heights resident since 1979. She is the former director of Reaching Heights, and is active with the Heights Coalition for Public Education and the League of Women Voters.