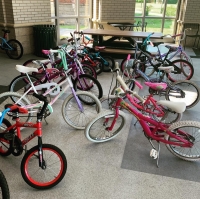 Some of the children's bikes given away for free—ready to go from the Cleveland Heights Recreation Center.

Between June and October of last year, Stephen Walker and Jerod Johnson gave away more than 100 bicycles to children who needed them; most lived in Cleveland Heights. The experience was so heartwarming, they want to keep it going.

It all started at the end of 2019 when Walker learned from a friend, Bill Pavilonis, that the Brecksville United Methodist Church had about 40 hand-me-down bicycles—largely kid-sized—that the church wanted to donate to children who didn’t have bicycles.

Walker has jobs with both the Cleveland Heights-University Heights school district and the city of Cleveland Heights Recreation Department. He sees bicycles as a way to get children away from watching TV and into exercise, through an outdoor activity that sets them on the path to health and wellness. His jobs enabled him to identify children who would benefit from a bicycle giveaway, and to find people and resources to help.

At first, Walker and Johnson, who became friends because both work for CH-UH schools, wanted to host an event to celebrate the bicycle giveaway. But the COVID shutdown last March forced them to scale back. When the Cleveland Heights Recreation Center’s North Ice Rink was closed for repairs, Walker was able to use some of that space for repair and storage of the bicycles.

On June 26, children and their families were able to come to the recreation center to pick up bicycles. Thanks to a generous donation from KellerNational, some families also received a $50 certificate to use at Dave’s Market. Each child receiving a bicycle was given instructions on safe cycling, as well as a bicycle helmet for safety, courtesy of the Ohio Chapter of the American Academy of Pediatrics and its “Put a Lid on It!” campaign.

As a result of postings on Facebook, and information the school district provided, some people donated money to buy additional, new bicycles, and others donated bicycles their children had outgrown. Walker started a 501(c)3, The United Youth Entity, to enable supporters to claim a tax deduction for their donations.

Meanwhile, more parents and children requested bicycles. By the end of September, Walker and Johnson had given away 102 bicycles. Walker admits that the generosity of donors, and the joy of the kids, moved him to tears at times.

Anyone who has a used kid's bike to donate, or would like to contribute money for the purchase of new bicycles, or help in other ways, is asked to contact Walker at steve13176@gmail.com.