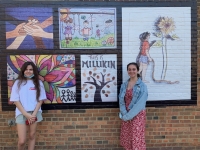 Residents of the neighborhood surrounding the former Millikin Elementary School have come together to enhance the small playground on the site and create a vibrant community space.

The Cleveland Heights-University Heights City School District closed the school in 2006 and is currently using the buildings there to house its maintenance operations.

Starting with just six neighbors in 2018, the Millikin Neighborhood Group began efforts to revitalize the playground, which continued to be used by many young families in the neighborhood. The group organized a cleanup of the playground area.

Under the leadership of Cindie Carroll-Pankhurst, Deby Auerbach-Brown, Robin Koslen and others, the group began to raise money for additions and renovations, including new landscaping and playground equipment. The group has built slides and installed a storage bench, a balance beam, and a tetherball court. Neighbors planted flowers and provided chalk, bubbles, and other toys to neighborhood children who frequent the park. “The tetherball has been a surprisingly big hit with the children,” Pankhurst said.

Last November, the group installed a two-part mural on the façade of the former school building. Local teenagers submitted works of art through their schools. Six pieces were selected to be part of the mural. More than 78 neighbors gathered to celebrate the mural’s unveiling on Nov. 8. Several of the teen artists, along with their families and teachers, attended.

Pre-pandemic, the group hosted several events, including a chalk festival and a music consort comprising students and alumni of Cleveland Heights High School. While the pandemic has made gathering more difficult, neighbors continue their efforts to raise money for the playground, tend to the landscaping, and improve this valued community space.

In July 2020, residents learned that the city of Cleveland Heights had made a preliminary offer to the school district to market the Millikin property for redevelopment. Pankhurst said she would like to continue to see the space used as a neighborhood playground. “This has been a positive factor in embracing our diversity,” she said.

To learn more about the group and how to get involved, visit “The Millikin Neighborhood Page” on Facebook.

Sydney Chickos is an intern at FutureHeights and a student at the Mandel School of Applied Social Sciences at Case Western Reserve University.