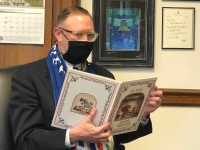 Mayor Brennan rehearses his annual reading of "The Night Before Christmas" at his office in city hall.

The University Heights Memorial Day parade, summer concert series, and Fall Fest were canceled this year due to the COVID-19 pandemic. One annual event, however, will not be stopped by the virus, and that is Mayor Michael Dylan Brennan’s annual reading of the poem “The Night Before Christmas” to city hall interns.

The third annual reading will be conducted on Zoom and broadcast over the city’s social media accounts starting at noon on Christmas Eve.

Brennan will read the story to intern Daniel Roche and other special guests, including the city’s brand ambassador, Cooper the Chicken, and former interns.

The poem was written by Clement Clarke Moore for his children in 1822, but was printed anonymously in 1823 in New York’s Troy Sentinel.  Whether Moore thought such a light-hearted vision of Christmas was beneath the dignity of his position as a literary scholar is still open to speculation. Regardless, it is considered one of the most popular verses written by an American.

“This has become a holiday tradition here at City Hall,” Brennan said. “The interns seem to enjoy it, and I hope kids across University Heights will this year as well.”