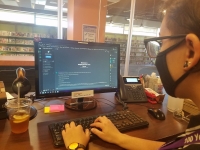 Before Heights Libraries shut down its branches in March, due to the COVID-19 outbreak, local teens could spend time at the library during after-school hours and on weekends, socializing with friends, doing homework, playing games, or relaxing with a book or comic.

While the buildings opened again for browsing and some limited services, library administrators closed all branches to the public on Nov. 19 in response to the Cuyahoga County Board of Health's stay-at-home advisory. Youth Services staff have found another tool for reaching teens—the online chat program Discord, which is similar to Zoom.

“When virtual learning started last March, a lot of teens were joking online about how much easier it would be to do classes through Discord, rather than school software,” said Youth Services Associate Talia Linina, who set up the library’s Discord account. “We realized that a lot of teens already had profiles on Discord and were interested in using it as a safe alternative to socializing in person. By setting up a library account, run by staff that the kids already know, we’ve tried to bring the library to the digital space they’re already comfortable with.”

Discord was originally designed for video game players, providing them with ways to find one another and communicate while playing games together. Because of its usability, Discord has become a popular platform for a wide range of users. It supports video calls, voice chat, and text, enabling people to get in touch in multiple ways, and making it very popular with teens, including kids who used to spend many hours in the Heights Libraries’ teen spaces.

“Our teens have been chatting with both each other and the staff,” said Linina. “When school was starting in the fall, they were checking in with each other, comparing schedules and teachers. Sometimes they ask questions about library materials and programming, sometimes they want to chat about the books they're reading, and sometimes they just want to talk about their day.”

To help teens find the information they want, staff had created multiple “text channels” for different topics, such as library-related questions, materials recommendations from staff and peers, and a general chat that’s like the library’s Teen Spot program, an after-school program that was suspended when the buildings closed.

During October, teens listened to creepy stories together in the voice chat, and played online Pictionary together, and in November the staff scheduled a round of a popular game, Among Us.

Youth Services staff are grateful that Discord has given them a way to reach teen customers, but are looking forward to the day when teens can come back to [spend time in] the buildings.

“I really miss the energy of having all the teens in the same space,” said Linina. “Discord helps a lot to keep in touch, but seeing everyone in person is impossible to replace.”

Teens ages 18 and younger can sign up for the Heights Libraries’ Teen Discord server by sending an e-mail to teen@heightslibrary.org.