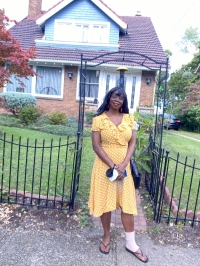 Denise Watson standing in front of her childhood home on Hampshire Road.

When Denise Watson was in sixth grade, in 1974, the youngest of eight children, her family moved from Cleveland to a house on Hampshire Road in Coventry Village. At the time, hers was one of the only Black families in this Cleveland Heights neighborhood.

“Coventry Village was a great family place,” Watson said. “I have an image of kids doing cartwheels through front-yard sprinklers. Kids walked to the parks and playgrounds, and families actually talked to each other. We didn’t have our heads buried in computers or cell phones.”

She remembers the neighborhood as very welcoming. “All of my friends were white,” she said. “The only racial problem I remember was the fact that some Black kids at school thought I hung out too much with white kids.”

Denise’s mother, Jessie Watson, quickly became a neighborhood icon, as she ran a popular mail-order business selling a variety of household items. She was known as a person who would always give a helping hand to neighbors in need. Watson remembers her mother promoting her business on a local TV movie program hosted by a local radio personality, John Lanigan.

Watson said she recalls thinking that some of their white neighbors seemed to wonder how this single Black mother could afford such a nice house. “They didn’t realize what a successful and resourceful entrepreneur she had become,” Watson explained.

Before moving to Cleveland Heights, Watson’s mother and father had operated a popular delicatessen on East 93rd Street in Cleveland. Watson’s father was a military officer who died in 1970, before the family moved to Cleveland Heights. Her mother died two years ago, at nearly 100 years of age.

Growing up in Coventry Village, Watson said she was always in demand as a babysitter for neighborhood families. She also earned extra money by walking the neighborhood to deliver the Plain Dealer. Some of Watson’s fondest memories of her childhood in Coventry Village and Cleveland Heights include hanging out with friends in the parking lot next to Coventry Beverage, Friday night ice skating at the recreation pavilion, movies at the fancy, still-relatively new Severance mall, sitting on the steps of Monticello Junior High, talking with girlfriends about boys, and enjoying the smell of egg rolls wafting up Hampshire Road from the Chinese restaurant on Coventry.

Watson got married in 1982, and moved just a couple blocks away, to another house on Hampshire Road, where she had two sons. Today, she lives in an apartment at Middlehurst and Mayfield roads, just two short blocks from her childhood home. Other than one year spent with a sister in Tacoma, Wash., Watson has lived her entire life in Cleveland Heights.

“When I think back on the neighborhood,” she said, “it seems that the sun was always shining.”

Robert Brown, a city planner with 45 years of experience, including nine years as Cleveland's City Planning Director, has been a resident of Cleveland Heights for more than 40 years and is currenty the board chair of FutureHeights.