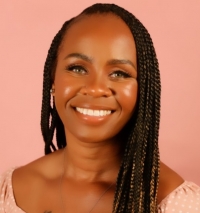 Crowe lives in Cleveland Heights with her daughters Elle, 7, and Cori, 3.

She served as the group’s interim director, and holds bachelor’s and master’s degrees in social work from Cleveland State University.

A Cleveland native and John Marshall High School graduate, Crowe was raised by a single mother. During her childhood, her family moved more than 20 times, and she transferred schools about 15 times. She is the first in her family to graduate from college and graduate school.

Cleveland Peacemakers Alliance Board Chair Kevin Griffin announced the appointment. “The board is enthusiastic about the next phase of the Cleveland Peacemakers Alliance,” Griffin said. “We are confident that Myesha and the CPA staff will serve as a trusted resource for young people in our community and that the organization will build bridges of opportunities and work to create environments that reduce incidents of violence among young people.”

Crowe said, “I am honored to have the opportunity to work toward a solution to a generational problem of violence, one that our neighborhoods and communities have been battling for years.”

CPA is an independent organization focused on reducing youth and gang violence in the city’s neighborhoods by engaging young people and those who influence them, such as family members and peers. CPA was re-launched in early 2016, when Boys & Girls Clubs of Cleveland, now a branch of Boys & Girls Clubs of Northeast Ohio (BGCNEO) agreed to take over the organization, restructure it and make it a subsidiary.

“Myesha is a passionate, driven leader who cares deeply about reducing violence in our community and keeping young people on a positive path,” said Jeff Scott, BGCNEO’s president and CEO. “She is committed to the mission of Cleveland Peacemakers Alliance and to finding ways to make our streets safer for everyone.”

Crowe’s experience includes a stint with Boys & Girls Clubs, where she served as Broadway Club director. She has also worked as a psychotherapist for homeless young adults and as psychological social worker at St. Vincent Charity Medical Center.

Ken Wood, a former journalist, is director of communications for Boys & Girls Clubs of Northeast Ohio.