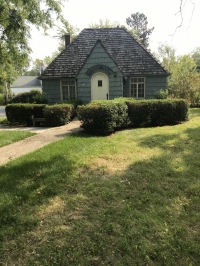 The cottage, built in 1930 and situated at the corner of Monticello and Lee boulevards, acts as the gateway to the Forest Hill neighborhood.

Forest Hill Home Owners Inc. (FHHO) is celebrating its 70th anniversary this year. Established on June 13, 1950, the association was created to "promote, safeguard, and improve the property value and general welfare of the community."

Celebrating in this pandemic year has required a different approach and has included Sunday strolls, T-shirts, area clean-ups, and new street signs featuring the signature cast-iron dove—an original symbol of the development. New signage is being planned, and an effort to repair and save the historic blue cottage at the corner of Lee and Monticello boulevards is underway.

Forest Hill is home to 930 residences spanning Cleveland Heights and East Cleveland. Originally the 600-acre country estate of John D. Rockefeller Sr., the land was purchased in 1923 by his son, also named John D., who, with New York architect Andrew J. Thomas, planned an upscale residential and commercial development "that would stand as the finest example of community planning in America."

Three parts of Forest Hill have the distinction of being listed on the National Register of Historic Places: In 1986, both the Heights Rockefeller Building and the 81 Rockefeller homes were listed, and Forest Hill Park was added in 1998 as a historic landscape.

According to Gretchen Mettler, FHHO president, "Forest Hill, with its close proximity to University Circle institutions and easy access to downtown Cleveland, is in a prime location. In such a diverse and historic neighborhood, we realize that we are not only residents, but stewards, of a special community with an impressive history."