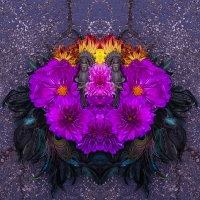 Miracle at Savatthi, by Stephen Calhoun.

In a Spotlight exhibition on view through Aug. 23, Heights Arts features the artwork of Heights native Stephen Calhoun, a photographer, designer, painter and musician.

Calhoun describes his approach to making visual art as a "musical process." His work employs found objects, algorithms and fractals to create images that have both organic and mathematical qualities. “Every form of creativity [has] something to do with the vibrations of materials,” he said. Calhoun’s creative process seeks out elements that vibrate both dissonantly and harmonically, from which he conducts and improvises the generation of his own creative image. “These steps are found in different configurations in every art form,” said Calhoun.

There is a strong, intentional reliance on chaotic natural forms and discarded broken objects in Calhoun’s art, which finds order and beauty in an otherwise chaotic visual space. Calhoun explained, “I think of it all as being functionally paradoxical. The finished image is orderly, [and its] symmetry is very hard to disrupt. Innumerable symmetries are hidden in the seemingly chaotic assembly, just as innumerable random (or stochastic) complexities are hidden in the symmetries.”

The artist has a keen interest in children’s response to his art. “We know how adults can make a simple prospect into something twisted by ego, expectation, and something like test anxiety,” said Calhoun. “Other times the adult beholder can easily access their child-like imagination and creativity and leap into the process of discovery without any additional hand holding. Kids? They are developmentally closer to their unfettered imagination, so, they naturally leap into the picture.”

As a general approach to looking at his art, the artist suggests viewers look for “nameable things” in the images: faces, doorways, rooms, and so on, then look for relationships between those things. “Collect in your mind what you have uncovered,” suggested Calhoun, “and see if there are any stories you can imagine.”

Heights Arts is at 2175 Lee Road in Cleveland Heights. Stringent Covid-19 safety protocols are in effect. Appointments to view Calhoun’s "immersive psychedelia" in person can be made online at www.heightsarts.org.

Additional information on Stephen Calhoun’s art is available at https://artiststephencalhoun.com.