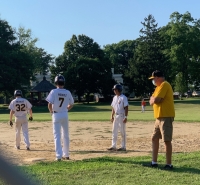 On June 24, Cleveland Heights High School’s 18U summer baseball team was supposed to play an away game in Perry. But the Perry field was soaked from an overnight rainstorm, so the game was moved to Heights High’s home field.

Partway through the game, a loud bang surprised players and fans alike. As they looked around, they heard children screaming and saw them running away from a house on Washington Boulevard. With the sight and smell of smoke in the air, parents, players and fans from both teams rushed to help.

A recently renovated duplex had caught fire due to faulty wiring in the garage, leaving two families—12 people and a dog—without a home.

Chalea Smith and her five children had recently moved to Cleveland Heights. For the first time, each of her kids had their own space with their own bedroom furniture—all of which burned in the fire.

On the other side of the duplex, Latia Brown and her five children lost everything, too, due to the fire, smoke, and subsequent water damage. Brown, herself a graduate of Heights High, had recently moved back to Cleveland Heights, specifically for the schools.

“I wanted my kids to have the same education I got growing up,” she said. Her son, a rising junior, football player, and member of Heights High’s National Honor Society, appreciates all that Heights offers, specially his Honors classes.

Parents from the Heights Baseball Boosters immediately stepped up to help these two families, promoting separate GoFundMe accounts for each and coordinating donations of clothing and household goods.

“In what has been a terrible year,” said Vikki Nowak, a Heights parent, “this is a story of community. Even the players found ways to help.”

Smith has since found a home in Shaker Heights and is overwhelmed by the encouragement, support and donations she has received. Clothing for her children was especially helpful in the days immediately after the fire.

Brown is living with her mother until a home in Cleveland Heights is ready for her family. “This is really hard,” she said. “But I’m so grateful.”

While there have been many offers of donations of clothing and household goods for the Brown family, they will not be ready to accept any material items until they move into their own home, which they hope will happen in October.

Krissy Dietrich Gallagher, a longtime resident of Cleveland Heights, is a freelance journalist under contract with the CH-UH City School District.