Hundreds march for a safer Heights 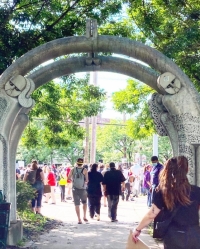 On Sunday, June 14, another peaceful and powerful rally brought hundreds of Heights residents together in unity with the Black Lives Matter movement.

Organized by Safer Heights, a grassroots activist group, the event began with speakers at Coventry P.E.A.C.E. Park who then led leagues of chanting and sign-carrying participants through Coventry Village, down Mayfield Road to Superior Road. The march paused outside of Christ Our Redeemer AME Church, where participants took a knee for a moment of silence. Then several speakers shared stories about their experiences as black members of the Cleveland Heights community, and called for systemic changes in policing.

The march then continued down Superior Road, looping back to Coventry P.E.A.C.E. Park, where organizers addressed the large and enthusiastic crowd, thanking community partners and volunteers who helped make the day a success.

Everyone was invited to stay for a picnic, with food provided by participants and local eateries.

Via Facebook, Safer Heights has asked that anyone who would be willing to share pictures or videos of the rally e-mail them to saferheights@gmail.com.

Sarah Wolf is a marketing VISTA at FutureHeights, a resident of Cleveland Heights, and a graduate-level community practice student at MSASS/Case Western Reserve University.