A look back and ahead at the Bradford cinder path 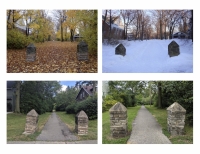 The columns in all seasons.

Bradford Road extends from Lee Road in Cleveland Heights to Edgerton Road in University Heights. A unique feature interrupts the street: a pedestrian path that connects two sections of the road. One-third of a mile in length, spanning four blocks, the path extends from South Taylor Road to Canterbury Road.

Four streets  have this path at their midpoints: Queenston, Kingston, Princeton and Canterbury. (Two landmarked farmhouses that belonged to the families who owned the land on which the streets were laid out are still occupied: 3497 and 3585 Fairmount Blvd.)

The building of Canterbury School inspired the creation of what is known as the Bradford Cinder Path, a city-owned property.

In 1921, the Cleveland Heights school board began to buy properties for the school on Canterbury and Princeton roads. From 1922 to 1925, in order to make the new school more accessible, the city of Cleveland Heights bought vacant lots on Queenston, Kingston and Princeton roads. The plan was to extend Bradford Road east of South Taylor, to the University Heights border.

But in April 1926, neighbors flooded city council with objections to a paved road for vehicles. Complaints and claims for damages were filed, and 75 residents signed a petition that stated: “That said improvement is not necessary for the public health, convenience, and welfare. That it will not improve Bradford Road. That the assessment is unreasonable, unjust and is not proportionate to the benefits to be derived by the undersigned property owners who are to be assessed. That the City should pay more than 2% of the entire cost.”

Many neighbors spoke up at the council meeting, and Mayor Cain stated that “he had been over the ground and he himself felt that perhaps a sidewalk through would be sufficient.” The matter was referred to committee, where it sat for 10 years. In the meantime, an unpaved path made of macadam, or cinders, was maintained. It was often muddy.

In 1936, plans for paving the path as a road resurfaced. This time the federal government would pay—specifically, the Works Progress Administration (WPA), designed to put Americans back to work on useful public projects during the Depression. There would be little cost to Cleveland Heights residents under the WPA plan.

At a January 1936 council meeting, “Mayor Cain stated he understood a great many in the audience were present to protest the proposed WPA improvement of Bradford Road." One Queenston Road property owner said he had lived there a number of years and had never missed a cross street. He suggested, if the city wanted to do something, it “pave a good sidewalk and landscape the pathway.” At a second meeting later that year, with neighbors still objecting, council approved “that the project (a paved street) be revised to cover the installation of a six-foot sidewalk and use the top soil to level off the balance of the property and do what tree planting the money will allow.”

In 1938 the WPA completed the work, paving just the cinder path and installing 14 stone columns at the intersections.

Today, school children, dog walkers, and bicyclists use the path, flanked by these unique columns. Cleveland Heights has much WPA-built stonework, and the columns were well built. But almost 100 years later, they need restoring. Plans are underway to do just that, and an application has been made to the city’s Landmark Commission to designate this historic, well-used, and much-appreciated pedestrian path as a Cleveland Heights Landmark.

Bradford Road residents have been awarded a FutureHeights Neighborhood Mini-Grant grant to help fund the column restoration, remove invasive plants, and replace them with native trees, shrubs and flowers appropriate to the site. With work the Bradford Cinder Path will become an even better corridor, welcoming birds and insects, as well as pedestrians and bicyclists. Contact peggyspaeth@gmail.com if you want to be involved.

Marian Morton is professor emeritus of history at John Carroll University. Peggy Spaeth is organizing the Bradford Pollinator Path, extending it to the Bradford Cinder Path.