Chatfield lights up in memory of Bill Mangano 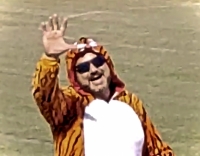 Chatfield Drive neighbors began setting out the luminaries just before dusk on Sunday, March 1. Carefully spaced in a long, flickering, meandering line stretching from Cedar Road to Fairmount Boulevard, it was a beautiful silent tribute to one of their own.

This was the second such memorial on Chatfield in recent years—this one in honor of Basil “Bill” Mangano, who passed away unexpectedly of a heart attack on Feb. 27. He was 49.

Once the candles were lit, Bill’s wife, Amy, their teenage daughters, and two dozen family and friends emerged from the Mangano home and took a slow, cathartic walk down Chatfield.

“I found out that afternoon that Chatfield was going to be lit up for Bill,” said Amy Mangano. “Jay and Sylvie Hart, our neighbors, came over and told me through their tears. It was the perfect night, as many of our friends and family members were at our house. Brian Linihan (Marotta’s owner) was sending dinner over for all of us. We had an amazing feast and then headed outside. Seeing the lights and the neighbors lined up on Chatfield was so heart-warming. We were overwhelmed.”

Bill Mangano loved Cleveland Heights. After graduating from Cleveland-Marshall law school, he built his union-side labor law practice here, devoting his career to fighting for working-class men and women all over Ohio. Local 860, representing the Cleveland Heights service workers, was one of Bill’s longtime clients.

Bill was a fixture at Heights girls’ soccer games, usually leading the cheering section, enthusiastically ringing his cowbell. Katie Herr, who also has a daughter on the team, said, “Bill was a force of nature. He was at the center of our community. Bill brought us together and made us laugh.”

Bill was a whatever-it-takes kind of person. Need someone to put on the tiger mascot outfit at halftime to fire up the crowd? Bill was your guy. “His impact can’t be summed up into one event, one moment, or one story,” said Coach Patrick Gleba. “Bill was our truest, biggest fan who cannot be replaced and will forever be missed.”

Bill poured that same limitless enthusiasm into supporting his fellow business owners in Cleveland Heights. He was a fixture at Quintana’s, Marotta’s and Mister Brisket, just to name a few.

Michael Weil, a Chatfield neighbor, remembers Bill at a backyard fundraiser for Roots of American Music. At one point it started to rain. A few minutes later Bill was setting up his tailgate tent on the driveway, to give people some shelter. “No request was made, and he made no announcement of his plan,” said Weil. “He simply took care of what needed to be done to make others more comfortable.”

Weil’s 18-year-old son Josh died in a car accident in 2015. “I remembered how meaningful and manageable (for us as the recipients) was the gesture of the luminaries when Josh passed away," said Weil. "I sent out an e-mail to the neighborhood wondering if anyone thought this would be a good idea to do for the Manganos. Within minutes people were out shopping for bags and candles.

“I have no doubt that Bill would be out doing whatever he could to help his neighbors right now during this strange, challenging time. I know from cruel experience that tragedy brings people closer together, and that beautiful, simple gestures can be uplifting beyond what we might believe possible. We see so many simple gestures and heroic acts being performed on behalf of our whole community. I imagine Bill would have been right in the thick of this.”

Adam Dew is a proud member of the Heights High Class of '94. He owns Dew Media, Inc., a video production company.