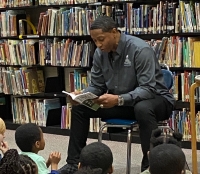 On March 6, retired NFL player Michael “Scooter” McGruder visited Noble and Oxford elementary schools. As part of NFL Tackles Reading, in partnership with Church on the Heights and Reaching Heights, McGruder shared his story and encouraged students to dream big and take their education seriously.

“I graduated from Cleveland Heights High School and I got to play in the NFL, like Jason and Travis Kelce, who both played for teams that won a Super Bowl," McGruder told students. "The next successful person from Heights High could be you or you or you!”

He asked the students, “Which one of you has a big dream? Who wants to be a doctor, a lawyer, a football player, or something else?”

Kevin McIntyre, pastor of Church on the Heights, grew up with McGruder, and invited him to visit these schools, located close to his church. “We played football together at Heights High and I followed his professional football career in Canada and the U.S.,” said McIntyre. The pastor is a member of the Board of Directors for the nonprofit Reaching Heights, which supports public education in the CH-UH City School District.

McGruder asked the students to “lean in” so he could share his “secrets” to success: 1) Read, read, read. Successful people are readers. 2) Surround yourself with people who will lift you up and won’t pull you down. 3) Don’t do drugs. People who get involved in illegal drugs lose all of their money. 4) Believe in yourself and dream big.

McGruder read a story about retired NFL player Dion Foxx, from the book Tackle Reading by Kathryn Starke, about how Foxx persevered to overcome stuttering. To another group of students, he read, Dream Big: Michael Jordan and the Pursuit of Excellence by Deloris Jordan, Mthe athlete's mother. McGruder asked the students to share something they remembered from the stories, and tied their comments back to his secrets of success.

McGruder brought with him his Super Bowl jersey, footballs from the championship game, his Super Bowl rings, and a few signed photos, and took photos with each group of students. One young man walked away saying, “This is a great day!”