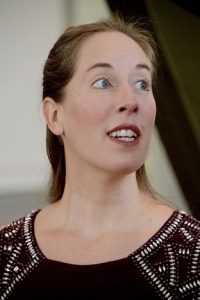 Witches: Revered & Reviled has been crafted to connect baroque music to present day issues of othering, bullying and stigmatization.

According to the musical program's description, the wish for an ordered society “frequently led to the persecution of individuals who were accused of straying outside the established conventional boundaries of ‘acceptable’ behavior.” The program focuses particularly on the criminalization of women who were labeled as not fitting into social norms.

Ironically, while women “ascribed with supernatural abilities” were severely outcasted and punished, they also were viewed as a resource to help those who suffered from mental and spiritual maladies. Thus, the program looks closely at reverence, as well as repulsion, through the stories of Circe, the Witch of Endor, and the Furies in a broad range of national styles and traditions of the 17th century.

The week starts with outreach workshops and performances at the Renee Jones Empowerment Center and Bard High School Early College, both in Cleveland. Musical performances, open to the public, will take place on Wednesday, March 18, at 7 p.m., at Blank Canvas CLE (2174 Lee Road, Cleveland Heights); Saturday, March 21, at 8 p.m., at Buckland Museum of Magic and Witchcraft (2155 Broadview Road, Cleveland); and Sunday, March 22, at 1 p.m, at the First Unitarian Church of Cleveland (21600 Shaker Boulevard, Shaker Heights). All public performances have a $10 to $20 suggested donation.

Founded in 2012, Burning River Baroque has been praised by a Boston Musical Intelligencer critic as “a group that left an indelible print on my psyche.” Audience members report that they appreciate the opportunity to experience the marriage of critical thought and musical performance in a welcoming and engaging atmosphere. One attendee described the experience as “not classical music as a privileged escape from reality, but classical music as a way to engage with and reframe current reality.”

Mostly a mom, Shari Nacson is a freelance editor, social worker, and nonprofit consultant who makes her home in Cleveland Heights. More than anything, Nacson is inspired by kids and adults who build connection through kindness.