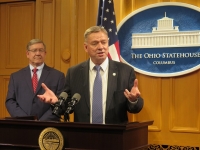 The 7 p.m. event is free and open to the public.

Their bill, HB 305, which seeks to create a new school funding system, is currently making its way through the legislature. The Cupp-Patterson legislation includes direct funding of vouchers and other non-public school expenses.

At the event, Patterson seeks to help the public understand the imperative, process, and unfinished business surrounding this legislative opportunity.

Co-sponsors of the event include the Heights Coalition for Public Education, League of Women Voters of Greater Cleveland, Reaching Heights, CH-UH PTA Council, the Cleveland Heights Teachers Union, and other civic groups.