Compost services expand to the Heights 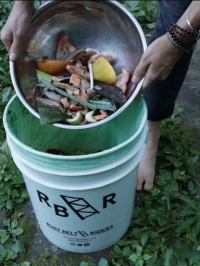 It happens to most of us—forgetting that container of leftovers at the back of the fridge until it’s too late. Finding mixed greens wilted and slimy, or the remains of another partially eaten sandwich is . . . well, yucky.

Food waste may not seem like a huge deal but, according to scientists, once it’s in a landfill all those scraps release dangerous methane gases into the atmosphere. In fact, if global food waste were its own country, it would be the third-largest emitter of greenhouse gases on earth, after the United States and China.

What to do? Backyard composting is great in theory, but actually pretty difficult. City ordinances require that compost bins be located a specific distance from structures and property boundaries, making placement a hassle. Furthermore, meat and dairy products can attract vermin, other animals and worms.

RBR is currently launching a household pick-up program in Cleveland Heights, University Heights, Shaker Heights, Beachwood, South Euclid, and the Larchmere-Buckeye neighborhood. For $30 per month, RBR will deliver a lined, five-gallon bin to homes, which can be filled with everything—fruit and vegetable scraps, eggshells and coffee grounds, meat, dairy products, and small bones.

Because this waste will be composted on a large scale, RBR is able to accept items that one wouldn't put in a backyard compost heap, including those labeled as BPI-certified compostable, such as utensils and paper cups.

Residents can place their full bin on their porch or doorstep on Wednesday, when it will be picked up and replaced with a clean bin. In addition to composting services, subscribers receive 10% discounts on all tilth (probiotic/nutrient) soil products and access to educational workshops.

Dan Brown, RBR’s co-founder, said, “This is how an individual who can’t afford a Tesla or solar panels on their house can make a difference.” He and his colleague, Mitchell Robinson, are offering readers of the Heights Observer a 10% discount for the first three months if they sign up for an annual or semi-annual plan. For more information and to sign up, go to www.rustbeltriders.com. Choose a plan under the Services tab, and use the coupon code HeightsObserver2020.