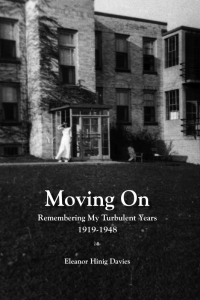 In a new memoir published by her family, Eleanor (Ellie) Hinig Davies vividly describes her experiences growing up in Cleveland Heights and Shaker Heights in the early 20th century.

Her father—Benjamin C. Hinig—was a prominent builder who built 26 houses in Cleveland Heights between 1910 and 1928; a dozen of them on prestigious Fairmount Boulevard.

While many of these houses were built for prominent Clevelanders, the family lived in a series of homes that he  built speculatively. The family stayed in each new house until it was sold, then moved on to the next new house, until Hinig's bankruptcy in 1928 brought it all to an abrupt halt.

With a unique asset of 20 rooms of furniture, the family demonstrated exceptional resolve after “losing it all,” moving into “other people’s houses” that were sitting vacant in Shaker Heights. As before, when a house sold, they “moved on” to another.

Davies shared her eloquently written memoir with her friends and family in 2010. After her death in 2017, at age 97, her family came across an exceptional archive of journals, poetry, photographs, and other short works.

Her memoir tells the compelling, coming-of-age story of a remarkable woman who transcended a series of family tragedies during the Great Depression and World War II, when she moved from Cleveland to Meadville, Pa. The lessons she learned through those very difficult years are timeless, and have much to teach about resilience, love, and the families we choose.

The book, Moving On: Remembering my Turbulent Years (1919-1948), is available at local stores—Mac’s Backs - Books on Coventry, Appletree Books, and the Heights Arts Holiday Store—and online at www.lulu.com.