The most-watched film in the Cedar Lee's history 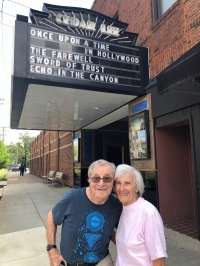 Bill DeCapite, 95, and his wife, Rose, 91, at the Cedar Lee Theatre. They act in a trailer that has run before every movie at the theatre for the past five years. Bill owned the Cedar Taylor Garage until 1995.(Photo: Fred D'Ambrosi)

It’s the most watched film in the history of the Cedar Lee Theatre. It’s not an award-winner, and it’s not “The Rocky Horror Picture Show.” Created by a director who’s a native of Cleveland Heights, it premiered in July 2014 and has been running daily ever since. By my back-of-the-envelope calculations, it’s played more than 40,000 times.

It’s the policy trailer that plays before every feature film. You know, the 55-second short that tells you to keep your feet off the seats, find the nearest exit, and turn off that cell phone! Locally produced for Cleveland Cinemas, it features local people, unlike most of its generic counterparts you see in national theater chains.

If you’re the rare Heights resident who hasn’t seen a film at the Cedar Lee in the past five years, here’s a recap (or, view it here: https://tinyurl.com/cedarleetrailer): The trailer starts with a couple buying tickets which shoot out animated confetti in joyful anticipation of the fun to come. The couple head to their seats, blocked by two rude dudes with their feet up. A subtitle tells you not to do that, and the dudes drop their feet. A few rows ahead, annoying text animations are rising from someone's phone. The woman in the seat next to the texter tells her to knock it off. The texter mouths "sorry," and puts her phone away. An older couple wisely checks for the nearest exit, which helpful animation illuminates. Finally, another couple is enjoying the film when a shocked or rude (you decide) patron ahead of them tosses popcorn into the air. It's a ton of storytelling, with no narration, crammed into less than a minute.

The idea for the local trailer originated with Cleveland Cinemas Director of Marketing Dave Huffman. “We felt it was time to have a little bit more of a personal touch,” he said. To make that happen he hired Digizoom Media, a Cleveland firm founded by former TV journalist Richard Stewart, who grew up in Cleveland Heights, a half-mile from the Cedar Lee.

Though the trailer would play in all of Cleveland Cinemas’ theaters (currently four in Greater Cleveland, one in Pittsburgh and one in Oberlin), and was shot in Cleveland's Capitol Theatre, Stewart’s creative process focused on his hometown and the theater he knew best, Cedar Lee. He said he wanted “something more reflective of the sophistication of Cleveland Heights. Diversity. Authenticity. A video with real people.” Huffman gave him “the autonomy and space and volunteers to create something special,” said Stewart. “And that’s what we did.”

Stewart credits Huffman with the casting. Everyone in the video is an unpaid volunteer. Huffman asked friends Lisa Pasquale and Tim Polak to star as the couple who buys the tickets. Three years later, when Polak decided to propose to Pasquale, Polak rented the same theater and played the trailer, with new video edited onto the end showing him walking out of the theater. When the lights came up, Polak walked in with the ring, and presented it to his future bride (they still haven't set a date) in front of family and friends, including Huffman.

Huffman recruited Bill and Rose Decapite as the couple looking for the exit. Bill, now 95, served as a Seabee in World War II and helped build the runway in the Mariana Islands that launched the Enola Gay on its mission to drop the atomic bomb on Hiroshima. He and Rose, 91, are legendary volunteers in the film and theater community, with 35 years at Playhouse Square, and 20 at Cain Park. They also usher at Dobama and Cleveland Public theaters. “Everyone we usher with says, ‘We see you in the trailer!’” said Bill, adding that, when they work will-call at the Cleveland International Film Festival, “The real theatergoers know us.” Even if you’re not a theatergoer, you still might recognize Bill if you ever had your car repaired at the Cedar Taylor Garage in Cleveland Heights, which he owned until 1995.

The shoot, on April 17, 2014, took about six hours. Most of the extras were recruited from Cleveland Cinemas Marquee Rewards Card members.

Both Stewart and Huffman said everything went pretty smoothly, but both remember having a hard time picking the music. “I took them through about 10 different songs,” said Stewart. Huffman said his colleagues liked an upbeat cut with a guitar solo, but he worried, “Everyone will be doing an air guitar solo, making fun of it.” Wanting something that would wear well after many viewings, “something that was innocuous, that you would barely remember,” Huffman chose a less distinctive song. Five years later, Stewart agrees, saying, “David knew something I didn’t.”

Stewart said he’s called Huffman to ask if Cleveland Cinemas wants to make a new trailer. Huffman told Stewart the company has no plans to make a change. Stewart is OK with that. He said nothing pleases him more than to go to the movie theater near his boyhood home and see something he created on the big screen. “I have an enormous sense of pride,” Stewart said. “It’s indescribable. If I’m sitting next to a stranger, I tap him on the shoulder and say, ‘I did that.’”