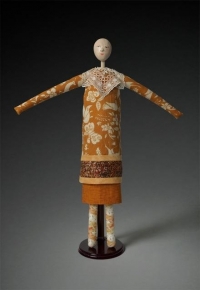 Abel took the photographs in the 1950s and '70s in France, mostly in Paris, using the distinctively rich Kodachrome color film. He studied and worked in France for part of his life, and became fascinated with the architecture. His images capture a time gone by in one of the most beautiful cities in the world. Abel worked for more than 30 years in Cleveland as an architectural photographer and photographic artist. While in France, he met his wife, who shared his love of art and architecture. With the encouragement and assistance of his family, the White Gallery is thrilled to show Abel's work.

Depicting subjects closer to home, Ingram has earned recognition as a painter of Cleveland buildings and sites. Her cityscape murals adorn the walls of Cleveland's recently renovated Garfield Building, and she has played a role in restoring grand spaces, such as the Marble Room in the former National City Bank building. An appreciation of various architectural styles is evident in her bold paintings.

A well-established artist and educator, White paints people and other living beings. A recurring theme in his work is the Underground Railroad, an exploration of the journey and its adversity. Ancestry and fatherhood are other themes depicted in his rich, expressive paintings about human experience. White is a teacher in the Cleveland Heights-University Heights city school district, and author/illustrator of a children's book.

Young, a textile artist, uses fabrics from all over the world to create her wall dolls, showcasing the materials she acquired herself, through her extensive travels, or received as gifts. Each doll is unique. Her early pieces have eyes, but no mouths, and none have hair. To embellish the dolls, she adds beads, shells, buttons and other found items. Young began making dolls after attending a workshop by the Textile Art Alliance, of which she is a member. She is also a much-appreciated longtime member of the gallery committee at St. Paul's.

Robin M.Outcalt is a committee member of the White Gallery at St. Paul's Episcopal Church in Cleveland Heights.