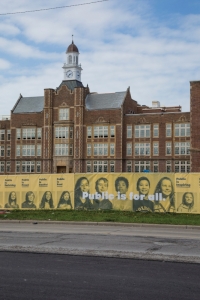 The "Public is for all" banner wrapped the fence throughout Heights High's renovation process.

“One of the things I love about the Heights is feeling like we live on an island,” said Frank. “You can park your car for the weekend and walk everywhere.”

Venturing down the hill for work, Frank enjoys Little Jacket's studio space in Little Italy, a site of creativity and camaraderie that contains time capsules such as antique file boxes and marketing artifacts from past and current campaigns.

Little Jacket’s most visible local project was the CH-UH City School District’s “Public is for all” campaign, which included fence banners that surrounded Heights High during its renovation. Frank said the inspiration for that campaign came from interviews in which community members were asked what the word “public” meant to them. Over four days, the team met with a few dozen students and faculty, interviewing each for a half hour, recording video segments, and taking the iconic black-and-gold portraits that adorned the corner of Cedar and Lee roads for several seasons.

Little Jacket’s work is “truly meaningful and deep,” said colleague and client AnneMarie Grassi, executive director of Open Doors Academy (ODA), a nonprofit that provides mentorship for more than 500 area youths plus their families, with a success rate of 100-percent completion of secondary education.

St. Paul’s EpiscopalChurch, whose congregation literally opened its doors to community youths during after-school hours, founded ODA in 2002. Frank joined ODA’s board in 2009 as chair of the marketing committee, was board president for four years, and has been an at-large board member since 2015

"You can see the emotion on his face" said Grassi, "He really believes in these kids. It’s true of all the organizations he works with. His work is his passion—and his passion is his work. He takes on projects that he really cares about and is invested in. He truly believes in the work he’s doing.”

Little Jacket’s campaign for the CH-UH school district recently shifted into its next phase, “Excellence is for all.” According to Scott Wortman, supervisor of communications for the district, phase two photos have transitioned from portraiture to a candid, photojournalistic style that shows community members in action.

“[Frank] brings a very special and unique connection between the district and Little Jacket because he is a district parent,” said Wortman.

With a rise in enrollment for the first time in eight years, there is optimism that the branding campaign has made a difference.

Another current Little Jacket project is marketing the College Club of Cleveland residences. Matthew Wymer, of WXZ Development, said, “It is the best experience we have ever had at a creative/design/marketing firm. They make the process fun.”

Little Jacket delivered on the developer’s wish to preserve what is historic, while offering appealing modern options, producing collateral that has a tactile, vintage feel, and relates to Frank’s favorite feature of Heights living—its walkability.