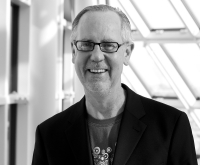 Jim Henke, a prolific contributor to, and volunteer with, the Heights Observer, died on July 8 from complications related to dementia, according to media reports. He was 64.

Henke began writing for the Heights Observer in 2013, following an illustrious career that included covering music for Rolling Stone magazine and 15 years as a curator at the Rock and Roll Hall of Fame and Museum.

A Cleveland Heights resident, Henke served as co-chair of the Heights Observer media project for several years, until 2017.

“For Jim, the Observer was a brief postscript to an incredible career. We felt fortunate to have him for the few years he was with us. He would write about anything and could find a story in everything. It wasn’t until much later that I learned he was dealing with a progressive disease the entire time. Our deepest sympathy goes out to his family,” said Bob Rosenbaum, who co-chaired the Heights Observer Advisory Committee with Henke.

Deanna Bremer Fisher, Heights Observer publisher, recalled, "I think Brendan Ring was the one who introduced him to me. Jim had come on one of my neighborhood tours, which ended up at Nighttown, and Brendan turned to me and said, 'You know who he is, don’t you?' I was thrilled that Jim was interested in writing for the Observer, given his background."

"Jim's contributions to the Heights Observer were substantial," said Kim Sergio Inglis, the publication's editor-in-chief. "I knew of his work through my own former career as a book publicist who handled publications by other Rolling Stone contributors. The fact that a writer of Jim's calibre and reputation was willing to cover such local topics with such enthusiasm seemed remarkable. The fact that he did it, unbeknownst to us, while facing serious health issues makes his dedication even more noteworthy. There were months when he would submit four or five stories, or more, and he could turn them around in less than a day. Given our reliance on volunteer writers to provide all of the Observer's content, his work really shaped our paper for a time."

More information about Jim Henke's life and work can be found at: