Movies and bands are coming to 'The Walt' 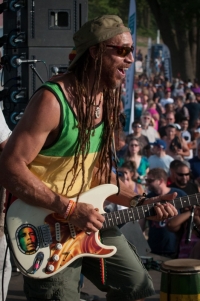 "E.T.," "Captain Marvel," and Carlos Jones and the PLUS Band are all coming to Walter Stinson Community Park, aka The Walt, as part of the continuing “Best Summer Ever” celebration in University Heights.

Steven Spielberg’s classic sci-fi movie "E.T. The Extra-Terrestrial" will be shown under the stars at The Walt on Tuesday, July 2. Pre-movie entertainment will be provided by RW Magic. All children in attendance dressed like a science fiction character will receive a University Heights frisbee.

Local favorites Otis and the Shoreway Saints will bring their rock show of originals and covers to The Walt on July 8. The eight-piece band will play original songs from its three studio albums, as well as covers from the 1960s through the present. The group has been named the Number-1 local band in the Cleveland City Voter Hot List. Ye Olde Scholl Treats N’ Eats will offer classic funnel cakes for sale before and during the concert.

J. Blues, back by popular demand, will perform at the Summer Concert Series on July 11 at 7 p.m., at The Walt, presented by the Local 4 Music Fund. J. Blues has modeled his own style of blues from the greats, including B.B. King, Elmore James, Taj Mahal and Lightnin’ Hopkins. The SmoQued CLE food truck will be on site, serving up barbeque starting at 5:30 p.m.

The University Heights Symphonic Band will perform pop music and movie soundtrack selections at the Hamlin Quad at John Carroll University on July 25.

Cleveland Scene magazine calls Carlos Jones and the PLUS Band the “undisputed champ” of Cleveland reggae bands. Sirius XM DJ Dermot Hussey says it's “one of the best in America.” The band will make its University Heights debut on Aug. 1 at 7 p.m. at the Walt. City officials anticipate a large crowd for this concert, and ask attendees to arrive early. The Chef Grey Wolf food truck will be on hand to serve concertgoers at this show, as will Off the GRIDdle. Carlos Jones is presented by a grant from the Northeast Ohio Public Energy Council.