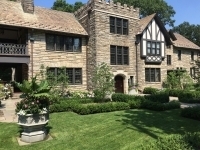 On May 22, the Cleveland Restoration Society and the American Institute of Architects granted 12 awards to significant restoration projects in Northeast Ohio at their annual Celebration of Preservation ceremony at Playhouse Square. Two were awarded to prominent Cleveland Heights restoration projects. Cleveland Heights High School received an award for Community Impact, and Harcourt Manor, a residence in the Chestnut Hills neighborhood, received the Craftsmanship Award.

At the awards ceremony, Cleveland Heights Board of Education Vice President Jim Posch said, “While I thank our great team of planners, architects, engineers, construction experts and contractors, this project was only possible because of the generosity of our Cleveland Heights and University Heights residents.”

Harcourt Manor is perched at the top of Cedar Hill. Kermode F. Gill, renowned builder of the Terminal Tower and Union Station, built (1911–15) and lived in the home. Designed by architect Frank Meade in the Elizabethan Revival style, with grounds landscaped by Ellen Biddle Shipman, the home has had only three owners in its 103 years of existence: the Gill, Herget, and Rudd families.

Goldberg noted, “The Rudds, who purchased the property in 2016, took one of Cleveland Heights' grand mansions that sat empty for several years, and brought it to its full potential and beyond by creating a fabulous architectural, decorative, and landscaping environment which is a great asset to the community. The original exterior features, in particular, were considered with the utmost respect, and Anya and John have brought back the glory days of Harcourt Manor as a member of the Ambler Heights Historic District.”

Accepting the Craftsmanship Award on behalf of her team of artisans, contractors and tradespeople, homeowner and interior designer Anya Rudd said, “The spirit of collaboration and the pursuit of excellence among these artisans was remarkable and there was a feeling of pride of project throughout the two years it took to complete the house. At the beginning these old buildings are so needy and so greedy. And then one day something so extraordinary happens.  You turn a corner and the house starts giving back. And the giving back is far richer and far greater than what you have given to it.”

Angelina Bair nominated the Rudds' home for the Cleveland Restoration Society award. Owner/founder of the property research firm Bair Consulting Services LLC, Bair is a board member of the Cleveland Heights Historical Society. She was hired to research the history of the Rudds' property.