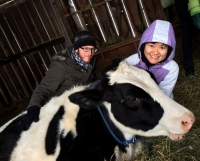 Josh Sias, Frances Cheng, and Jude the cow at the LASA Sanctuary.

Six years ago, Joshua Sias and Frances Cheng began offering pop-up vegan fare—first, from a chocolate shop in Lyndhurst, then at various other locations in Greater Cleveland, including The Bottlehouse in Cleveland Heights. These themed dining experiences were a way to bring new cuisine to the area and show that great food can be made without harming animals—something important to Sias and Cheng. What started as little more than a hobby has led the couple to establish their own Asian-themed restaurant in Cleveland Heights.

The two, partners and spouses, are looking to a June opening for Foodhisattva, their vegan Asian restaurant at 2158 South Taylor Road.

“We were the first in the area to have a vegan pop-up,” Sias said. “And after a while, people started asking us to do it again.” When their semi-regular pop-up nights at The Bottlehouse on Lee Road became increasingly popular, the couple realized there was a demand for vegan food on the East Side. “It was a long time coming,” Sias said. “And the natural evolution of a pop-up is a restaurant.”

Sias, who has a master’s in philosophy, said it was his studies, specifically Eastern philosophy, that led him to veganism. After becoming vegan, “I had no other options,” said Sias, “so I had to learn to cook for myself.”

Sias impressed Cheng, a physiologist with a focus on nutrition, by preparing a traditional Asian meal during one of their first dates. “It was just like the food back home,” she said. “I had to ask him, ‘How did you learn to cook like that?’”

Sias’ skill in preparing dishes from various countries and making them vegan, along with the couple’s frustration with a lack of vegetarian and vegan restaurants on the East Side, led to their vegan pop-up, Foodhisattva.

While Foodhisattva on South Taylor will offer a full vegan menu, it will be an Asian-fusion restaurant first, according to Sias.  However, the partners say they will still offer some of the hottest sellers from their themed pop-up nights. “We plan to have our Bulgogi Cheesesteak, made with a cashew ‘cheese’, and our Wasabi Potato Pierogi,” Sias said. They also plan special themed nights, similar to the pop-up nights they used to host.

Jason Novak is a freelance writer in Cleveland. He has written for the SHAD Connection and Larchmere Life, as well as various other projects. He lives in the Shaker Square area with his wife, Emily.