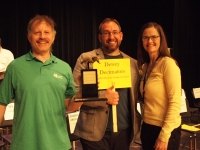 Congratulations to the Dewey Decimators, representing and sponsored by Friends of the Heights Libraries, for winning the Reaching Heights Adult Community Spelling Bee for the third year in a row. This year Chris Mentrek and Victor Rosenberg, missing their teammate Susan Marshall, battled through five rounds to win on the word “mnemonically,” the adverbial form of mnemonic, which means assisting or intended to assist memory.

More than a spelling competition or fundraiser, the Reaching Heights Spelling Bee is a community-building event in support of high-quality public education.

Unlike traditional spelling bees, this is a team competition of at least two, and at most three, adults who put their heads together to determine their best guess of a word’s spelling. They write it on a piece of paper, and then send one teammate to the microphone to read the spelling to the judges.

Round 3 is the Musical Round, in which teams can sing the spelling of their word to be forgiven one spelling error.

Many dressed up in colorful and interesting costumes, and were encouraged to bring their fans—spelling bee groupies! The Minority Student Achievement Network team had the largest number of groupies, who each won a gift certificate to Tommy's restaurant in Coventry Village.

Sponsors cover the participation fees of many teams; for others, the spellers themselves donate the fee. All funds raised at this event go to support Reaching Heights’ in-school programs, including Many Villages Tutoring, Reaching Heights Role Models, and Community Care Teams.

Midway through the competition, all in attendance were wowed by a performance from the award-winning Heights Lady Barbershoppers. Many enjoyed goodies from the bake sale—especially bee-themed treats from For Goodness Cakes—and took their chances on 10 amazing raffle baskets, containing gift certificates from Melt Bar & Grilled, Cleveland Cinemas, The Fairmount, Aladdin’s Eatery, Nighttown, BW3's, Appletree Books, Blossom Music Festival, Ensemble Theatre, and more.

Steve Presser, co-owner of Sweeties Big Fun in Orange Village, returned for his 24th year as Master of Ceremonies. He wore his black jacket covered with letters, and joked with the spellers that it had "all the answers" on it. Presser commented that this year's Bee was the "hardest Bee ever! It was shorter than most with more difficult words."

To see additional photos of the spelling bee and learn more about Reaching Heights, visit www.reachingheights.org, or call 216-932-5110.