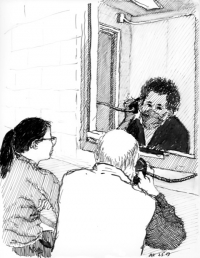 Mumps is among the documentatary drawings Kelsey completed while Cagan (depicted front right) translated for detainees as they met with their pro bono attorneys.

“I never thought that I would do this type of work,” said Mary Kelsey, who recently returned from a week of volunteer service at ICE’s Stewart Detention Center in Lumpkin, Ga. Steve Cagan, a fellow Cleveland Heights resident and volunteer, commented, “The most important praise I ever get is when people say, ‘What you’re doing is so important to us.’”

Through Cagan’s journal entries, shared with friends, and through Kelsey’s drawings, these Cleveland Heights residents are shining a light on the reality of immigration detention.

“They’re not criminals,” said Kelsey, “and they’re being treated like it. Most came in at a legal port of entry and requested asylum.”

Cagan first heard of the project in 2018. After decades volunteering as a photographer and activist in Northeast Ohio and Latin America, he decided to use his language skills to assist refugees. After doing some online research to see where his translation skills would be put to meaningful use, Cagan applied and waited. “It took a while to get responses,” Cagan said. “They’re extremely busy and overworked.” In time, SIFI asked Cagan to join a weeklong shift at the Stewart facility, which houses male and transgender female ICE detainees.

Cagan has traveled to Lumpkin twice. In October 2018, he drove down for his first weeklong shift, during which he interpreted for four attorneys, in 12 separate attorney-client interviews. The detainees, from behind a glass partition, are screened for eligibility to be represented by SIFI attorneys, or try to prepare for bond and parole hearings.

Cagan described that first trip as “a very difficult week, a very emotional week,” and likened the work to the “starfish story”—it’s a lot of effort to help one person out of thousands who need assistance, but it means the world to that one person. After returning home, Cagan e-mailed Spanish-speaking friends to encourage their help.

A photojournalist, Cagan had noticed that photography is disallowed in detention facilities. He asked if drawings were permitted, knowing that Kelsey, his veteran compatriot in travel volunteerism, could do the task. With permission granted, Cagan and Kelsey traveled to Stewart in February.

Kelsey, who calls her work "documentary cross-cultural drawing"—a way of reporting real-life situations and conditions—always asks for permission from the individuals before drawing them.

With photography prohibited, drawn images provide rare visual documentation of asylum seekers within the centers where they are detained while their cases are evaluated.

SIFI lead attorney Erin Argueta noted, “The drawings are important to humanize our clients and potential clients, and to improve our and our volunteers’ ability to tell the story of immigrant detention to people who have never been to a detention center. It’s one thing to hear that immigrants—parents, children, asylum seekers, and members of our communities—are being detained in deplorable conditions, and it’s another to have a drawing that shows the immigrant alone facing a judge who will decide his fate in a matter of minutes, or the barriers to communication between lawyer and client, including the dirty Plexiglas that separates us.”

Cagan, who has decades of familiarity in documenting daily life in Latin America, commented on what drives crisis-based migration. Most asylum seekers, he said, “live in a culture where family ties are much stronger than here.” Each person, he stressed, has a compelling reason to leave those ties, to migrate under hardship, and to persist with an asylum request despite being jailed. It’s the work of translators, documenters and attorneys to help covey these compelling reasons to the judges who will decide the fate of those seeking asylum.