by Jennifer A. Lang and Andrea C. Turner 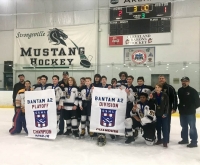 The Eastside Tigers Bantam A2 team, after winning the CSHL playoff and championship titles on March 2.

In the semifinal game, which took place the weekend before the final, Bleick scored on a pass from Lang to beat Strongsville in double overtime, advancing the Tigers to the final against Mentor—the only team to beat the Tigers in the regular season.

The Tigers were down 0-1 in the championship game until Sotiropoulos scored at the buzzer to tie the game at the end of the second period. Sotiropoulos then scored the game-winning goal with 3:39 minutes left in the third period.

Solid defense by Thomas Cheshier, Lang and Turner kept the Tigers ahead, despite an offensive onslaught by Mentor after that team pulled its goalie.

Jonathan Cheshier sustained a concussion at the Rock & Roll Cup tournament in February that knocked him out of post-season play, but he put in great work between the pipes to enable the Tigers to win the division and qualify for the playoffs.